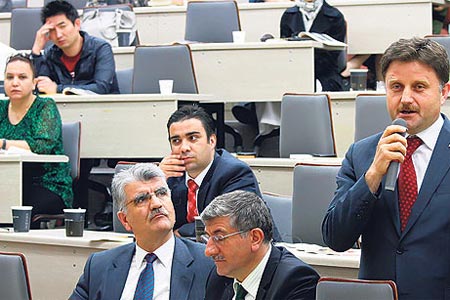 The principles, aims and practices of the Hizmet movement have been discussed at a workshop in South Korea’s leading universities attended by Turkish and South Korean academics and other prominent figures.

The opening speech was delivered by the head of the university’s Research Center for Social Sciences, Jang Deok-jin, who said they are happy to host such a program. Following him spoke Hüseyin Yiğit, the president of the İstanbul Cultural Center. Yiğit addressed the activities of the center, which aims to strengthen the ties between Turkey and South Korea. Later on in the workshop, Uşak said the GYV was established with the aim of supporting democratization in Turkey and other nongovernmental movements. “The Hizmet movement (aka Gulen movement) has proved that it is possible to achieve democratization without breaking away from Islamic values,” he said. Briefly mentioning the biography of Fethullah Gülen, a well-respected Turkish Islamic scholar whose ideas form the inspiration behind the Hizmet movement’s activities, Uşak said that at the core of Gülen’s principles are Islamic scholars such as Said Nursi, Imam Ghazali, Mevlana Jalal al-Din Rumi and poet Yunus Emre.

Another speaker in the workshop, Today’s Zaman Editor-in-Chief Keneş, noted that regardless of what country is in question, no government that does not pay regard to the public’s needs can survive. Specifically mentioning the ongoing uprising in Syria, Keneş said external powers only care about their own interests in the Syrian issue. The second part of the workshop took place at Kyungbuk University on Friday. One of the speakers, a professor at the university’s department of English culture, Nam Jeong-seop, said that before coming to the workshop program he watched news broadcast on TV and saw that a Pakistani girl had been killed by her brother in an honor killing. “When I saw this news, I thought of schools pioneered by Gülen. And I said to myself that if that boy had studied in Gülen schools, he would have never committed that murder. I think the movement’s schools make great changes to both personalities and to societies,” he said.