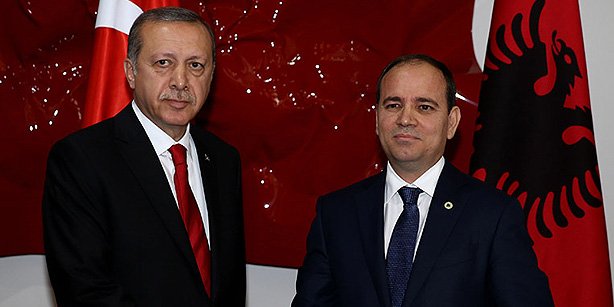 In a speech during the opening ceremony of a mosque constructed with funds provided by Turkey in Tirana last week, Erdoğan described the Gülen movement — a civil society movement inspired by Turkish Islamic scholar Fethullah Gülen, which has established a network of schools, universities and associations across the world to promote education and inter-faith dialogue — as a terrorist organization.

“We consider this structure, which has become a source of threat to our nation and state, as a terrorist organization,” Erdoğan said in his call to Albanian authorities to shut down Gülen-affiliated schools.

Erdoğan’s remarks sparked a barrage of criticism from Albanian politicians, with the Albanian president also taking part in the debate. Nishani strongly rejected Erdoğan’s characterization of the Gülen movement and dismissed the Turkish president’s demand for the closure of the schools.

“There is no such terrorist organization in Albania. In my view, the Gülen schools pose no threat either to Albania or Turkey,” he said in a televised interview aired on Ora News on Monday night.

Erdoğan’s one-day visit has left a sour taste in Albanian political circles and has inflicted damage to bilateral relations. Politicians and journalists were jolted by what they describe as Erdoğan meddling in Albania’s domestic politics, expressing dismay over the Turkish president’s disregard for Albania’s sovereignty.

Nishani spoke during a program titled “Tonight” hosted by Ilva Tare, revealing the content of his meeting with Erdoğan after his Turkish counterpart’s remarks to the media about the meeting.

Erdoğan told Turkish reporters that he discussed the “parallel structure” — a reference to the Gülen movement — with both the Albanian president and the prime minister. Erdoğan said the Albanian leaders responded positively to his concerns.

The Albanian president, however, denied Erdoğan’s claim and said the subject was not raised during the bilateral meeting between Turkish and Albanian officials. “This subject was briefly addressed outside of official discussions. We expressed our thoughts [on the subject] as presidents of two different countries,” Nishani told Tare during the interview.

Erdoğan told the audience during the opening ceremony of the mosque. He said he talked to Albanian leaders and was assured that they would do anything necessary to deal with the terrorist organization.

Erdoğan offered educational services and investments in return for the closure of Gülen schools.

“As to my knowledge, there is no such terrorist organization in Albania. When it comes to the schools affiliated with the Gülen movement and investments [by Turkey], I cannot speak on behalf of the Albanian government,” said Nishani. “I told Mr. Erdoğan that Gülen’s schools operate within the scope of the law and in line with the principle of secularism, do not pose a threat to security and have modern infrastructure.”

When asked by Tare whether he could intervene in Erdoğan’s remarks, Nishani said Albania could not restrict the content of a visiting guest’s public speech. “We can control what our officials say, but not visiting guests.”

Nishani also emphasized that Albania does not interfere in Turkey’s domestic politics and does not want to be a part of its domestic conflicts.

Erdoğan given appropriate response to ‘political’ request regarding Turkish schools

Albanian Interior Minister Saimir Tahiri has said his country’s relevant authorities gave Turkish President Erdoğan the necessary responses to his recent request for the closure of Turkish schools in the country.

Tahiri said at a press conference on Monday that Erdoğan’s request to shut down the schools and the Gülen movement’s activities in Albania is “political” rather than aimed at ensuring security in the region. The minister also said counterterrorism efforts should not be tied to simple political gains.