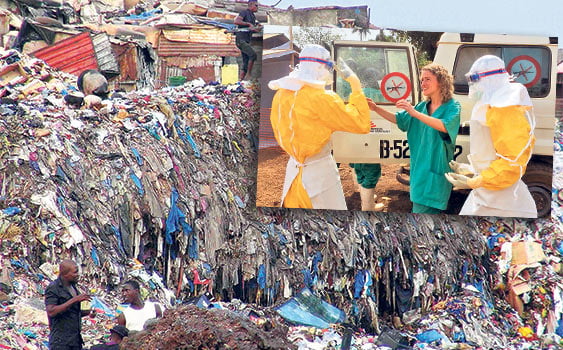 With the help of Guinean Minister of Family and Social Affairs Camara Sanaba Kaba and Guinean Minister of Communication Alousseni Makanera Kake, Kimse Yok Mu delivered aid from Turkey to areas most affected by the epidemic. The aid organization provided Guineans with 9,000 packages of detergent, 10,000 bottles of chlorine, one ton of soap, 200 bottles of antiseptic liquid, 1,000 masks and 50 boxes of gloves, valued at TL 50,000.

Veysel Kayabaşı, Kimse Yok Mu’s coordinator of health aid, said all border crossings to Guinea have been closed due to the Ebola epidemic and that more precautions are urgently needed to stop the virus from spreading. Kayabaşı added that they have been doing their best to stem the epidemic and explained that there is no known cure for Ebola. Experts have been warning locals not to eat wild animals or bats, which carry the disease; they are also being educated on hygiene. “We are supporting them by raising awareness,” Kayabaşı noted.

The World Health Organization (WHO) has announced that the Ebola virus, seen in Guinea for the first time in March, is the most dangerous virus that exists in the world. The WHO noted that 25 percent of people afflicted with Ebola end up dying; unless precautions are taken early, they warn, the death rate might rise to 90 percent.

It is estimated that nine out of 10 Ebola patients receive the virus from a wild animal; as such, consuming wild animal meat has been prohibited in the region.

Ebola was first seen in 1976 in the Democratic Republic of Congo. Since then, almost 300,000 people have died in 15 separate epidemics. Ebola is transmitted to humans via blood and other body fluids.

Since Turkey kicked off a strategic initiative to improve its commercial relations with Africa in 2003, this extra attention has resulted in an increased trade volume with the continent. Beninese President Thomas Yayi Boni said Africa also sees Turkey from a strategic perspective, noting that Turkey is one of Benin’s high-priority partners.

Taipei, Dec. 6 (CNA) A social movement that promotes love, tolerance, dialogue and peace inspired by Turkish Islamic scholar Fethullah Gulen bears many similarities to Confucianism, a Taiwanese scholar said Monday. Turkey is entering a period of reflection, just as ancient China during the period from 770-221 B.C., when Confucianism matured, and the Hizmet (service) […]