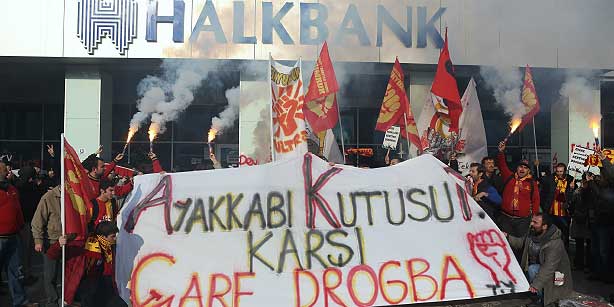 İSTANBUL
Famous Turkish investor Nasrullah Ayan has said the volume of money transfers involved in the recent corruption probe indicates that Halkbank worked as a conduit for Iranian trade not only with Turkey but other countries as well.

Speaking to Today’s Zaman in a phone interview, Ayan said the exact amount of these transactions is unknown, but talking into account the quantities mentioned in the case files and reported in the media, “which may be more than 87 billion euros or less than that,” he said it was quite likely that Halkbank worked to benefit Iran’s trade as a whole. “It seems that Halkbank worked like the Central Bank of Iran,” Ayan said.

Ayan refuted claims that the Hizmet movement was behind the corruption and embezzlement investigation. “The extent of this operation is far beyond the reach of the cemaat [the Hizmet movement],” he said. He thinks, rather, that powerful international groups could have pulled the trigger or provided technical support to the probe. He pointed to the fact that the operation was launched after the agreement between Iran and the P5+1 nations in Geneva — which gave Iran partial relief from a harsh regime of sanctions — and said that “Iran may have sent some documents to the US pertaining to the former trade scheme that Iran utilized to skirt the sanctions.”

Indeed, these days Iran is making moves to normalize its trade with the world. Iranian officials have made several announcements that they will take advantage of the opportunity provided by the Geneva agreement to boost trade with neighboring countries. Early this month, Iranian speakers at a meeting of the Foreign Economic Relations Board’s (DEİK) Turkey-Iran Business Council celebrated the P5+1 agreement as the dawn of a new era for Iran, and said that Turkey will be the first to benefit. For instance, First Deputy of the Iranian Commerce Ministry Mohammed Dust Husseini underlined that the government of newly elected President Hassan Rohani is resolved to improve economic relations with the world, adding that Turkey will have a “special role” to play. This suggests a radical break with the way the country has done business in the past.

This idea is supported by a corruption investigation Iran is currently pursuing. The probe involves politicians and businessmen who were highly influential in the administration of former President Mahmud Ahmadinejad. The head of the Social Security Organization, Saeed Mortazavi, as well as Iran’s wealthiest businessman, Babak Zanjani, are being investigated by a parliamentary commission over allegations that they bribed and blackmailed members of Iran’s legislature. Ayan said that whatever is happening in Iran should not be considered independent of the ongoing investigation in Turkey.

Ayan went on to mention a statement by Halkbank’s jailed General Manager Süleyman Arslan. Arslan said Halkbank earned over $2.5 billion from its trade relations with Iran. He said such a sum couldn’t possibly be made through the gold trade alone, as being the middle man in gold deals promises a profit of 1 percent at best. If that’s true, $2.5 billion in profits would mean $250 billion of gold was traded, “which is definitely not the case,” Arslan said. This could imply, he added, that Halkbank may have possibly engaged in money laundering.