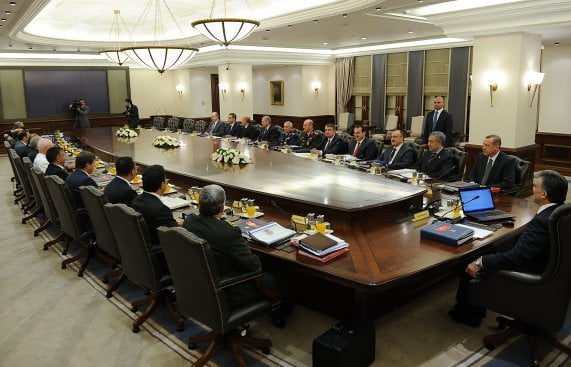 The Feb. 28, 1997 military coup may be a thing of the past, but there are some anti-democratic practices, this time orchestrated by the government, that make people feel as though they are going through a coup period similar to or even worse than Feb. 28.

Today Turkey marks the 17th anniversary of the Feb. 28 coup, which is also described as a “post-modern coup” that targeted a democratically elected government. One would expect individual rights and freedoms to have been strengthened since the last coup, but this is unfortunately not the case. Although it is not the military this time, rights and freedoms are still under the control, or more accurately restriction, of a higher power — the government.

The Justice and Development Party (AK Party) government’s grip on individual rights and freedoms has increased, particularly after the breaking of a far-reaching investigation into corruption and bribery claims on Dec. 17, 2013, which have implicated some government officials, including the prime minister and members of his family. In an attempt to bury the claims, the government has kicked off a campaign of pressure and intimidation that critics say is tantamount to a suspension of rights and freedoms.

On Wednesday, the National Security Council (MGK) held a meeting under the chairmanship of President Abdullah Gül. A statement released after the meeting led to comments that the government is working to revive the spirit of Feb. 28. “Structures and activities that threaten the security and comfort of our people were discussed [at the meeting],” read the statement. The MGK’s use of “structures” was read by many as a reference to the Hizmet movement.

On Feb. 28, the powerful military forced a coalition government, led by late Prime Minister Necmettin Erbakan, to step down, citing claims of rising religious fundamentalism in the country. Erbakan subsequently resigned and his Welfare Party (RP) was shut down by the courts. The Feb. 28 coup brought a series of severe restrictions on social life, including the expulsion of thousands of officers from the military for no reason at all and an unofficial but widely practiced ban on the wearing of headscarves at university campuses and in positions of public service.

On Dec. 17, 2013, dozens of people, including businessmen close to the government and the sons of three former ministers, were detained on accusations of corruption and bribery. Of these, 24 were later arrested. Some of them were recently released pending trial.

Expulsion of officers vs. purge of policemen

Some 2,000 military officers were expelled from the Turkish Armed Forces (TSK) during the Feb. 28 period because of alleged involvement in anti-secular activities. Others faced disciplinary measures. And today, as many as 7,000 police officers have been removed from their duty and reassigned to different posts after the corruption operation of Dec. 17, last year. In addition, dozens of prosecutors, including those involved in the probe into corruption and bribery claims, have been reassigned since that date. Critics say the government reassigned those police officers and prosecutors in order to prevent the corruption probe from gaining ground. Moreover, certain officials from other government agencies, including the Turkish Radio and Television Corporation (TRT) and the Ministry of Finance, were also sacked.

In the run-up to the Feb. 28 coup, a large conservative community became the target of pro-coup circles. Former Chief Public Prosecutor of the Supreme Court of Appeals Vural Savaş referred to religious people as “vampires,” “blood drinkers” and “a malignant tumor” in an indictment he prepared to have the conservative Virtue Party (FP) shut down by the Constitutional Court on the charge that the party sought to place Turkey under Islamic rule. He also claimed that members of religious fundamentalist movements had infiltrated government institutions.

Similarly, a campaign is currently under way against religious citizens. Starting on Dec. 17, 2013, when the corruption investigation became public, Prime Minister Recep Tayyip Erdoğan has sought to discredit the investigation by calling it a Hizmet movement plot to overthrow the AK Party government. The Hizmet movement, which is inspired by Turkish Islamic scholar Fethullah Gülen, denies these accusations. The prime minister has on various occasions referred to members of the Hizmet movement as “cave dwellers,” a “gang,” “criminal group,” “parallel state,” “virus,” and “secret organization.” He even likened the movement to the Hashishin, a shadowy group that carried out politically motivated assassinations during the time of the Seljuk Empire.

The Feb. 28 coup dealt a severe blow to the country’s education system. The middle schools of religious imam-hatip schools were closed down at the time, and a lower coefficient system was put into practice for vocational schools, including imam hatips, in an attempt to keep graduates of those schools out of the higher education system. The AK Party government is now planning to shut down private test preparation institutions, called dershanes, which many say will damage the education system. Despite the public outcry, the government is determined to pursue its plans. Many believe that dershanes are a crucial means of providing students with a fair chance in the competitive high school and university placement examinations.

In the run-up to and after the Feb. 28 coup, many conservative businessmen faced economic sanctions and boycotts. State banks refused to give loans to those businessmen’s companies, which they described as “green capital” or “Islamic capital.” Some of them went bankrupt. After Dec. 17, 2013, the government declared a “war” on some companies belonging to businessmen close to the Hizmet movement. The most concrete example is Bank Asya. There are claims of a government-instigated plan to sink Bank Asya with massive cash withdrawals as a form of revenge against the Hizmet movement.

In addition, following the corruption operation, the government targeted the companies of Akın İpek, a businessman known for his support for the Hizmet movement. The activities of gold mining company Koza Altın A.Ş., owned by İpek, were halted in late December of last year.

Thousands of people, including politicians, intellectuals, soldiers and bureaucrats, were profiled on the basis of their religious and ideological backgrounds during the Feb. 28 coup era. Many people lost their jobs because of this profiling. The military established the Western Study Group (BÇG) to carry out the profiling. In November of last year, claims emerged that the National Intelligence Organization (MİT) had profiled thousands of people according to their ideological and religious leanings and shared this information with government agencies, including the Prime Ministry. The targets of profiling were reportedly members of the Hizmet movement as well as members of other religious groups that had voiced criticism or disapproval of the government’s activities.

Last but not least, the General Staff briefed members of the judiciary during the Feb. 28 period. Those refusing to attend the briefings were removed from their posts. For example, Hüseyin Altın, a State Security Court (DGM) prosecutor, was sacked after refusing to attend the briefings. Similarly, former public prosecutor Reşat Petek resigned in protest against the briefings. Since the launch of the corruption investigations, there has been growing pressure on members of the judiciary. Dozens of judges and prosecutors were removed from their duty and assigned to other posts. In addition, Parliament recently passed a law to restructure the Supreme Board of Judges and Prosecutors (HSYK). With this law, the government will have a stronger grip over the judiciary.

The most effective and profound actor in this acquaintance process, on the other hand, has been without a doubt the Hizmet Movement inspired by the Honorable Fethullah Gulen’s teachings. I can list the movement’s initiatives in Brazil as follows: Its affiliated school “Colegio Belo Futuro Internacional” has been offering Portuguese-English bilingual education in the country since its establishment in 2007.