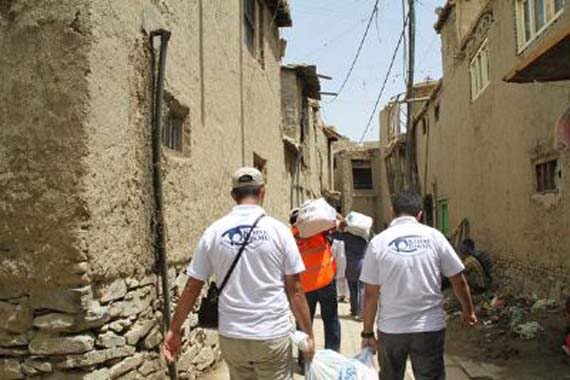 Abundance and blessings of the month Ramadan have reached out to Chad –one of the poorest African countries- in the form of Turkish people’s aid for orphans and the needy.

Setting its sights on hosting 1 million 168 thousand at iftar dinners, the foundation provided aid packages to 1,600 and iftar dinners for 5,400 people to date under the auspices of the local Turkish school Complexe Scolaire International Tchado-Turc and Lyon-based Motif Foundation.

Chad Turkish Schools’ General Manager Huseyin Serce, who was personally involved in aid efforts, said “We’ve delivered aid to one of the oldest settlements of the country, Gaoui, in cooperation with Kimse Yok Mu (KYM). There are a great number in need in this densely Muslim-populated region. 5,400 people have been provided iftar dinner at particularly at orphanages and handicapped facilities.”

KYM carries on with its aid campaign

KYM has delivered aid, in particular, to orphanages and foundations for the handicapped and widows in the central African country, Chad. It continues it campaign “Worldful aid”, aimed at providing iftar dinners for 1 million 168 thousand and aid packages for 288 thousand 300, in 81 provinces across Turkey and 103 countries all over the world.