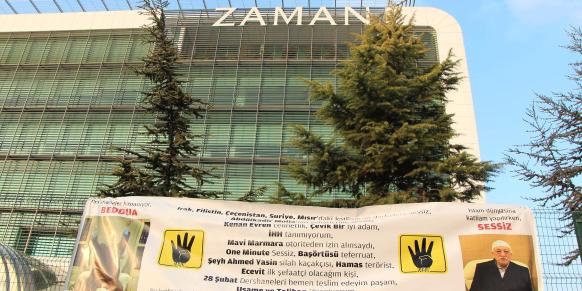 Gülen suffered extensively at the hands of powerful figures and media of the Feb. 28 period. A number of lawsuits were filed against the scholar. However, he was acquitted of all charges and the Supreme Court of Appeals confirmed these acquittals in 2008.

And now, Gülen and his Hizmet movement are being targeted in a major smear campaign. Some media organs, owned and run by the Justice and Development Party (AK Party) government, have been publishing stories saying that the scholar and his movement are part of a clandestine organization that is seeking to overthrow the government. Prime Minister Recep Tayyip Erdoğan and some officials of his government have been raising similar claims and even insulting Gülen and the Hizmet movement. On various occasions, the prime minister has called Gülen a “false prophet,” “fake saint” and a “bogus scholar.” He has called the Hizmet movement a “parallel state,” “gang,” “illegal organization” and “raving Hashashins” — referring to a historical order of assassins.

Ümmet Kandoğan, a former deputy from the now-defunct True Path Party (DYP), told Sunday’s Zaman that the government is currently engaged in a “witch hunt” against the very people who have spent their lives serving their country and nation. “They are targeting Gülen with groundless accusations and slander. They are working to create a false perception of Gülen. This cruelty cannot go on. It is harsher than the Feb. 28 period,” he said.

On Feb. 28, 1997, the powerful military forced a coalition government, led by late Prime Minister Necmettin Erbakan, to step down, citing claims of rising religious fundamentalism in the country. Erbakan subsequently resigned and his Welfare Party (RP) was shut down by the courts. The Feb. 28 coup brought a series of severe restrictions on social life, including the expulsion of thousands of officers from the military for no reason at all and an unofficial but widely upheld ban on the wearing of headscarves at university campuses and in positions of public service.

One would expect individual rights and freedoms to have been strengthened since the last coup, but this is unfortunately not the case. Although it is not the military this time. Rights and freedoms are still under the control, or more accurately restriction, of a higher power — the government.

The AK Party government’s control over individual rights and freedoms has increased, particularly after a far-reaching investigation into corruption and bribery claims went public Dec. 17, 2013. The investigation implicated some government officials, including the prime minister and members of his family. In an attempt to bury the claims, the government has kicked off a campaign of pressure and intimidation that critics say is tantamount to a suspension of rights and freedoms.

While the Feb. 28 coup targeted a large conservative community, today’s anti-democratic practices directly target the Hizmet movement. Many businessmen and some media groups have been discriminated against on the grounds that they are members of or are sympathetic to the Hizmet movement.

“Under the law, no one can be declared guilty unless his hand in a crime has been proven. They [the government] are directing accusations without offering any evidence. The prime minister has been accusing people [of working against the government] since Dec. 17. He has been insulting civil society groups and making statements as if those groups have been involved in criminal activities. The fact that not even a tiny shred of evidence has been given to prove the claims and accusations reveals the immense dimension of cruelty [against Gülen and the Hizmet],” Kandoğan said.

A criminal investigation was launched against Gülen in late April. The news of this investigation suggests that the smear campaign against Gülen and the Hizmet movement is likely to take on a new dimension. The investigation is based on allegations and news reports that the scholar attempted to overthrow the government rather than on facts and evidence. The investigation came shortly after Prime Minister Erdoğan publicly said that a formal process would be started to get the United States to extradite Gülen. Gülen is in self-imposed exile in the US, though there is no legal hurdle preventing him from returning to Turkey.

The investigation into Gülen was launched following a complaint filed by a former noncommissioned officer, identified as C.O. The officer told the media in early May that his complaint against the scholar was based on a number of reports that had appeared in government newspapers. “I am basing my complaint on newspaper reports and my thoughts. I am unhappy. I do not want to be promoted in the media or become popular. I do not like things like this. I have also filed many criminal complaints against the prime minister,” he said.

Prosecutors have so far failed to take action on C.O.’s complaints against the prime minister.

According to Kandoğan, the AK Party government will realize, sooner or later, that the pressure it has been applying on certain individuals and groups will not take it anywhere. “Despite all drawbacks, we have to stand by freedoms, democracy and laws,” he added.

Speaking to the media after the launch of the investigation, Gülen’s lawyer Nurullah Albayrak said there was no available information regarding the probe into the Islamic scholar in the National Judiciary Informatics System (UYAP), a judicial network where any investigation must be filed by prosecutors before moving on to conduct a probe. The lawyer said the probe was based on news reports published by some newspapers and compiled by a plaintiff. He also said he and his client would take action against the probe, which lacks the required legal basis.

On May 7, the Journalists and Writers Foundation (GYV) — whose honorary chairman is Gülen — held a press conference and its president, Mustafa Yeşil, denounced the ongoing smear campaign against Gülen and the Hizmet movement. He said the campaign has turned into a “lynching campaign,” something he said was not witnessed even during the coup eras. He also said the campaign is being promoted by Prime Minister Erdoğan, some Cabinet ministers and media outlets close to the government.

“Worrying declines in the fields of democracy, human rights and freedoms have occurred recently,” Yeşil said.

Since the graft probe became public, the AK Party has been quickly reassigning members of the police force and the judiciary as well as bureaucrats who do not share its same ideology. As many as 15,000 police officers and hundreds of bureaucrats and judiciary members have been reassigned in recent months.