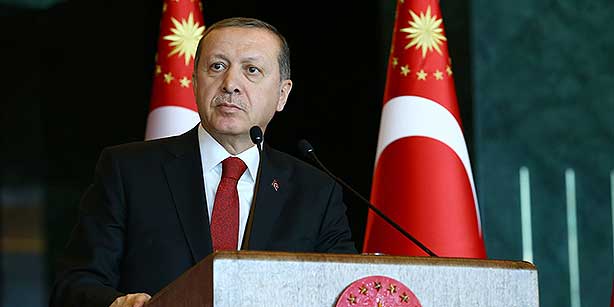 President Recep Tayyip Erdoğan speaks at a conference of ambassadors in Ankara on Tuesday. (Photo: DHA)

Speaking at a conference of ambassadors in Ankara, Erdoğan said schools that had been established abroad by the non-governmental volunteer civic group called Hizmet, also known as the Gülen movement as it was inspired by Islamic scholar Fethullah Gülen, should be taken over by the Maarif Foundation that is to be established by the government soon. Erdoğan’s revised tactic targeting these schools comes after a failed effort to have them closed by host countries.

“The schools and trade ties that this structure [Gülen movement] has built are not their own. They were set up with the opportunities offered by this country [Turkey],” he said, suggesting that they should be turned over to the Maarif Foundation that is yet to be set up.

Lamenting the fact that the Maarif Foundation has not yet gotten off the ground, Erdoğan asked the government to rush a bill through Parliament authorizing Turkey’s Ministry of Education to take over these schools abroad.

Erdoğan’s remarks, seen as a blunt interference into other countries’ own domestic affairs, may complicate Turkey’s bilateral ties with these countries. Erdoğan’s own efforts at lobbying for the shutting down of Gülen-inspired schools during state visits have blown up in his face, prompting strong criticism from officials in other countries.

During a visit to Albania in May 2015, for example, Erdoğan’s call for the closure of the schools met with an angry response from Ben Blushi, a deputy from the ruling Socialist Party of Albania (PS), who called on the government to reject Erdoğan’s request, saying that Albania is not a colony of Turkey.

Erdoğan’s current efforts to declare such schools as having been formed by a terrorist organization — a reference to the Gülen movement, which has hundreds of schools around the world to promote education with the aim of facilitating interfaith and intercultural dialogue — created unease and caused backlash from many officials in other countries, especially in Africa, though many fed back their protestations privately to Turkish officials, asking them to leave the matter out of bilateral talks.

Albania’s Parliament Speaker Ilir Meta visited a Turkish school in the capital Tirana in a clear show of support for these schools following Erdoğan’s remarks. Ilir Kulla, who acted as an adviser to the Albanian president from 2007 to 2010, noted that the Turkish schools have been operating in Albania for 25 years and have proven their value in that time. “These institutions pay their taxes to the state and provide education in line with the laws. We respect Turkey and Erdoğan, but we have no reason to close these schools,” Kulla summarized.

On Tuesday, Erdoğan specifically mentioned the Balkans and Africa as battleground places where Turkish ambassadors should work harder to possess ownership of Gülen inspired schools. He promised to push the Gülen movement with everything within the government’s power. Complaining about the increased amount of negative press on Turkey in recent years regarding press freedom woes and allegations of the Turkish government being a sponsor of ISIL terrorism, Erdoğan accuses the Gülen movement of being behind such reports.

Though Erdoğan once strongly promoted Turkish schools abroad — some of which he personally inaugurated — Erdoğan has now targeted these schools as they are established by NGOs and volunteers from Turkey who are inspired by the Gülen movement. Erdoğan accuses sympathizers of the Gülen movement of being behind a major corruption investigation that went public in 2013, implicating members of the ruling Justice and Development Party (AK Party) government and Erdoğan’s inner circle. The movement strongly denied the allegations and the government has not been able to present any evidence so far linking the movement with the graft probes.

The president’s campaign has failed to ruin the long-standing record of the schools’ achievements in more than 160 countries around the world, and, with no indications that the schools are at odds with local authorities, none have been closed. Academic research, observations by journalists and reports by authorities all support the reputation of the schools as institutions that promote peace on a global scale.

“The Turkish school has so far obeyed the law. As long as you conduct your educational activities within the legal framework, you will not have the slightest trouble in my country,” Central African Republic (CAR) acting President Catherine Samba-Panza said last year, after praising the school’s contributions. “Above all, the Turkish school has proven that it is our real friend by not leaving the country during its internal turmoil. …We will never forget this,” she added.

In 2014, again speaking to ambassadors, Erdoğan called the corruption investigation involving former government ministers nothing but a “treacherous plot” to sabotage Turkey’s international standing and ordered Turkish ambassadors serving abroad to “tell the truth” to their foreign interlocutors. That order drew protestations from many diplomats, who said that defending the government against corruption allegations was not the business of ambassadors.