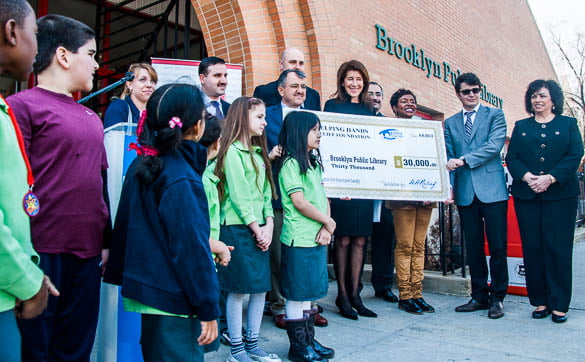 Brooklyn Public Library President and CEO Linda Johnson gave Clarke and the Turkish donors a tour of the damaged library before the ceremony.

A coalition of Turkish-American organizations forked over $40,000 yesterday to the Gerritsen Beach library (2808 Gerritsen Avenue) and Gerritsen Beach Elementary School (P.S. 277), institutions that have suffered in the five months since Superstorm Sandy rocked the community.

Of the $40,000 donated yesterday, $30,000 is going to the Brooklyn Public Library’s Gerritsen Beach branch, one of two branches in the system that has been unable to reopen due to extensive damage. The checks were handed over during a ceremony in front of the branch. Prior to the ceremony, Congresswoman Yvette Clarke toured the facility, which has been gutted down to bare walls, floors and rafters.

“We believe that Brooklyn Public Library and P.S. 277 are invaluable resources for the community, where people of all ages will benefit tremendously in many different ways,” said Nevzat Yilmaz, president of Helping Hands Relief Foundation. “This is dedicated to building a better future for the children and families of our community, and leaves a footprint for the next generations of Turkish-Americans to take care of community facilities that serve the people.”

Brooklyn Public Library President and CEO Linda Johnson was on-hand to receive the check, delivered by a cadre of Amity School students. She said the library would use the funds in part to rebuild the library with green technology and infrastructure.

P.S. 277 Principal Jeanne Fish said the school would use the funds to install new smartboards and laptops in classrooms.