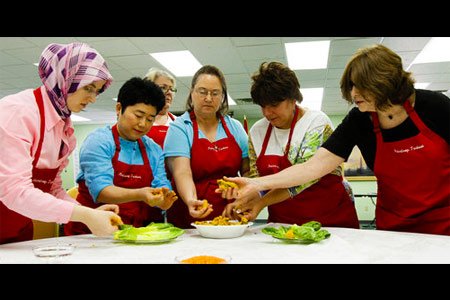 Building a Turkish Empire, One Friend at a Time

Turkish Cuisine Classes held at Little Rock Raindrop Turkish House was featured in The New York Times on the 15th August 2012 by Joan Nathan, an award-winning American author of cookbooks. Nathan met with the Turkish cuisine class participants during her visit to Arkansas last spring. Joan had a chance to visit Raindrop, have conversations with the cuisine class group and taste the delicious lentil patties prepared by the ladies.

She was impressed by the warm atmosphere and friendship that the ladies from different backgrounds built around cooking classes and Turkish food. Nathan shared her experience in her column in The New York Times. Below is Joan’s story.

THE aroma of sautéed onion and pepper wafted from a converted two-story office space next to a shopping center here. The ingredients were to be combined with red lentils, scallions and parsley, then molded into balls and wrapped in lettuce leaves, an appetizer from Oktay Usta, a famous Turkish chef.

Hilal Cansizoglu, a 28-year-old Ph.D. candidate at the University of Arkansas at Little Rock, was teaching this recipe in a class with two friends to introduce Americans to Turkish cuisine.

Ms. Cansizoglu, who moved here two years ago from Dallas with her husband, said it was a way to help her get used to living in the United States.

“This also makes me feel attached to people here,” she said.

Such cooking classes have sprung up across the south-central part of the country in the last several years. Meeting weekly, groups of women cook a meal, eat, and share stories and recipes for cultural dishes.

“Turkish cuisine owes its heritage to the Ottoman Empire, so it includes ingredients from Central Asia, the Middle East, the Balkans and Eastern Europe,” Ms. Cansizoglu said as she molded the cooked lentils with bulgur, tomato and pepper paste, scallions and cumin into oblong balls.

“We call the organization Raindrop House because we need drops of rain to reach out to local communities,” said Mehmet Ulupinar, manager of policy and relations here.

The group began in 2000 in Houston, which has a large Turkish population, but there are only about 1,000 Turkish-Americans in Arkansas.

“Cooking class is a very good opportunity to share our food with our friends,” Ms. Cansizoglu said. “I say friends, because after a while, we become friends. After we show them how to cook Turkish food, then we eat what we cook all together on a round table, regardless of thinking who we are or what background we have.”

Sometimes the teachers buy ingredients in Dallas and Houston, which have Turkish grocery stores.

Sometimes they try the Indian store in Little Rock, which has halal meat and ingredients like the red lentils for the dish from Mr. Usta. Depending on the recipe, they sometimes do the prep work at home.

“We have some similarities in cooking to the Arab world, because they are very close,” Ms. Cansizoglu said. “But we are open to everyone, actually.

“Right now we don’t have Arab women,” she said, “but American women, a woman from Japan, a Korean living in Little Rock.”

Rita Fagan has been coming to the class, which began six years ago, for three years after learning about it from her rabbi, who was doing outreach in the Muslim community after 9/11.

A member of Congregation B’nai Israel, she invited the Turkish women to an event earlier this year, where they made hamantaschen, a Jewish cookie with a pocket of fruit, nuts, caramel or cheese. For the Muslim women, she substituted vanilla powder for the vanilla, which has alcohol in it.

To end each class, Ms. Cansizoglu and the other teachers demonstrate a dessert, like kadaif, crumbled shredded phyllo covered with walnuts, more phyllo and sugar syrup.

“The most fun, though, is when someone’s mother comes over from Turkey and we watch her make phyllo from scratch,” Ms. Fagan said. “She starts off with a little ball of dough made from flour and water. It is amazing to watch her roll it out to a 4- or 5-foot square of dough.”

“Although we mostly talk about food culture, other things come out,” she said. “At the last cooking class, we put henna on the hands of a Turkish lady who recently got married. We joked about thongs. We had fun. They wanted to show us how henna night is a ladies-have-fun night, like a bridal shower.” 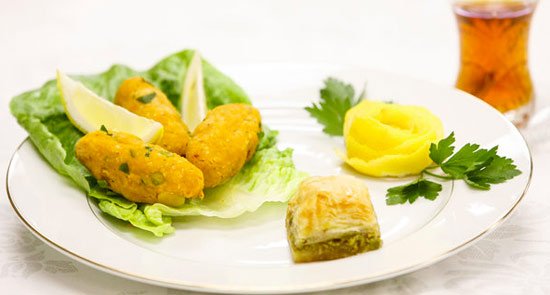 A version of this article appeared in print on August 15, 2012, on page D3 of the New York edition with the headline: Building a Turkish Empire, One Friend at a Time.