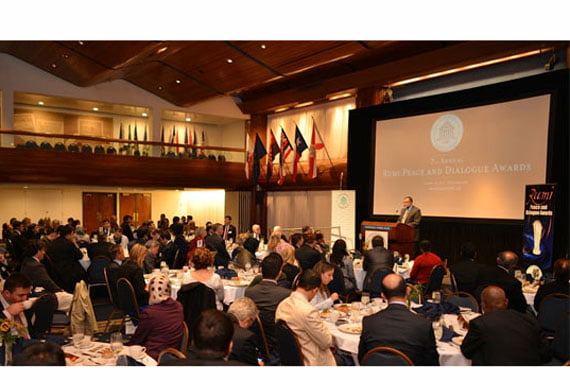 In attendance at the seventh of the Rumi Forum’s annual Peace and Dialogue Awards ceremonies were academics from 15 different countries and representatives of civil society organizations.

Recalling that the Rumi Forum, which was founded in 1999 with the mission to foster interfaith and intercultural dialogue, stimulates thinking and exchange of opinions on supporting and fostering democracy and peace all over the world, forum President Emre Çelik stated that it further aimed to provide a common platform for education and the exchange of information. Çelik, seeing education and dialogue as the only means to overcome ignorance added: “The Rumi Forum’s honorary president, Fethullah Gülen, motivates institutions established with similar purposes about adopting common values like respect for human rights and democracy.”

Delivering the opening speech at the organization, Angela Greiling Keane stated that her organization had many missions, most of which are in line with ideas Mevlana, the founder of a Sufi school of spiritual thought, supported. Keane, focusing on the fact that they placed much importance on freedom of speech, said they had carried out studies worldwide on this crucial matter. Spreading of dialogue and tolerance is what they try to achieve, she added.

South African Ambassador in Washington Ebrahim Rasool said after he read “Masnavi,” written by Sofi Saint Mevlana, his admiration towards Mevlana grew as he thought the book was a remarkable work. Resul added that the Rumi Forum was a part of the Hizmet movement, known for its cultural and educational activities around the world.