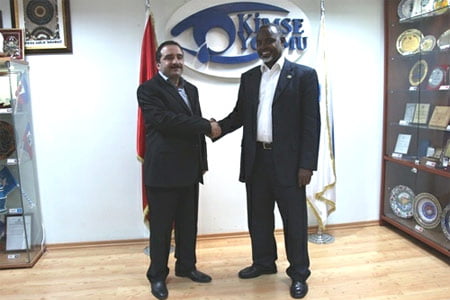 Mogadishu’s Governor Mr. Muhammed Ahmed Nur visited Hizmet movement’s relief organization Kimse Yok Mu (KYM). The Governor and his delegation had a meeting with KYM’s President Unal Ozturk and KYM General Secretary Celal Turkoglu, which lasted approximately one hour. During the meeting views were exchanged regarding the ongoing projects in Somalia and Mogadishu.

KYM did something that no one has done before

Governor Ahmet Nur commented after the meeting, “Something about the meeting was very informative. KYM arrives quickly to places where disasters happen and they were the first help association to come to Somalia and bring aid and relief supplies. However, KYM did something that no one has done before by bringing hundreds of Somali students to Turkey and giving them scholarships. This is very important because it’s paid training in Somalia. We are very thankful.”

Mogadishu is not the world’s most dangerous city

Your most impressive activity is bringing 700 Somali students to Turkey

President Unal Ozturk asked the Governor what he thought the most impressive activity of KYM in Somalia so far and the Mr. Ahmed Nur answered, “Bringing 700 Somali students to Turkey”. He also gave his thanks to Turkey. After the meeting the KYM president presented the Governor with a gift, and the honored guest and delegation left the office.