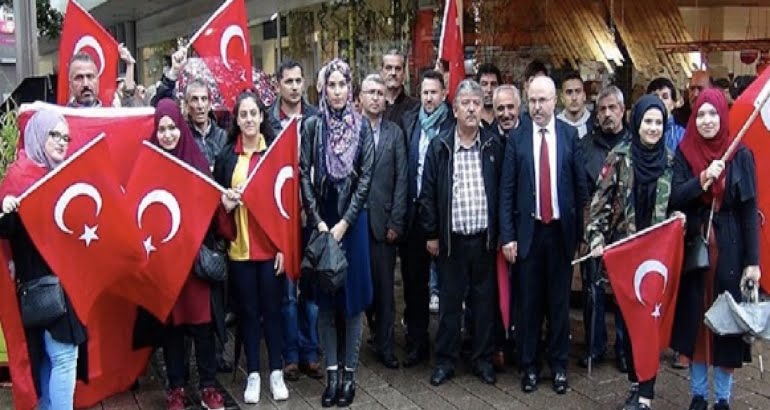 A group of pro-Erdoğan Turkish Islamists came together in the city of Duisburg, Germany and protested the schools operated and inter-cultural dialogue activities which have been carried out by the Turkish people who are affiliated with the Gülen movement, according to reports in pro-government Turkish media on Sunday.

A group of 10-15 Erdoğanist people have also slammed German authorities to allow the sympathisers of the Gülen movement to continue their educational and inter-cultural dialogue activities. Erdoğanist-Islamist Bekir Sipahi, who is a member of Duisburg Integration Assembly, has stated that there is no place for the members of Gülen movement in Duisburg where 85 thousands Turks live in.

Labelling Gülen movement sympathisers as “traitors”, Sipahi has stated that “Now on, we start to act to stop them,” by reminding that the Gülen sympathisers organised an activity in Duisburg under the “We Are Chased” banner. Sipahi and his supporters have chanted slogans and slammed the inter-cultural dialogue activities of the Gülen followers.

Claiming that he has carried the issue to the agenda of Duisburg Integration Assembly and get a reply of “We have no information on the issue,” Sipahi insults the assembly members by saying “If so, we are asking, what is your duty?”

Ruling Justice and Development Party (AKP) deputy Metin Külünk has reportedly also called the protestors and supported them in their protests against the inter-cultural dialogue activities.

Turkish government under the autocratic rule of President Recep Tayyip Erdoğan has been chasing critical Turkish citizens abroad including Germany. Erdoğan regime have used both Islamist Turkish groups, state institutions and Erdoğanist bodies in guise of civil society organisations for oppressing and spying on critical Turkish citizens and those who had to sought asylum after fleeing from Turkey because of Erdoğan regime’s oppression in the country.

16 Turkish imams were accused of spying for the Turkish government on Gülen movement followers in Germany on May 2017. Ten imams who work for Religious Affairs Turkish-Islamic Union (DİTİB) had fled the country to avoid legal proceedings. A total of 20 Turkish citizens have been facing an investigation on charges of spying on followers of the faith-based Gülen movement, according to a report in the German Die Welt daily in April.

Tensions rose between Turkey and Germany over operations against DİTİB imams who were claimed to be spying on people affiliated with the Gülen movement, which the Turkish government accuses of masterminding a failed coup attempt in Turkey on July 15, an accusation strongly denied by the movement.

In February, the coordinator of DİTİB, Murat Kayman, announced his resignation over the allegations. In the same month, German police teams raided the apartments of four DİTİB imams in North Rhine-Westphalia and Rhineland-Palatinate who were suspected of acting as informants.

The Federal Public Prosecutor’s Office (GBA) said in a statement that the imams had acted on an order issued on Sept. 20, 2016 by the directorate to profile Gülen movement sympathizers. In March, GBA launched an investigation into Halife Keskin, the foreign relations general manager of Turkey’s Religious Affairs Directorate (Diyanet), over his order to Turkey’s diplomatic missions and imams to gather information on people sympathetic to the Gülen movement.

Speaking in Passau in southern Germany in March, German Interior Minister Thomas de Maizière said it was a “criminal offense” to carry out espionage activities on German soil and that they “will not be tolerated by us.” “That applies to all foreign states and all intelligence services,” he added.

“We have repeatedly told Turkey that something like this is unacceptable. No matter what position someone may have on the Gülen movement, here German jurisdiction applies and citizens will not be spied on by foreign countries,” he said.

After a spying scandal involving DİTİB, Erdoğanist Turkish imams working in mosques, schools and prisons in Germany have refused security checks and quit their jobs, reported pro-Kurdish media on Thursday.

According to report, when a children’s comic glorifying ‘martyrdom’ was published by the DİTİB in the summer of 2016, the then Justice Minister of Germany, Thomas Kutschaty had issued an order for security check for all imams working in government institutions. The security checks tightened after several Turkish imams were prosecuted for being a Turkish spy and collecting information about German citizens and institutions.

According to the data provided by Germany’s North Rheine Westphalia (NRW) government after the introduction of the obligatory security check for imams working in prisons, most of the imams have quit their jobs.

Turkey survived a controversial military coup attempt on July 15, 2016 that killed 249 people. Immediately after the putsch the ruling Justice and Development Party (AKP) government along with Turkey’s autocratic President Recep Tayyip Erdoğan pinned the blame on the Gülen movement.

Dignitaries, clergy, and everyday citizens, Jews, Christians and Muslims gathered Thursday night at Tarrytown’s DoubleTree Hotel by the invite of the Turkish Cultural Center for a Ramadan dinner, speeches, and entertainment. State Senator Andrea Stewart-Cousins praised the far-reaching outreach and inclusivity of this group and the peacefulness of their mission.