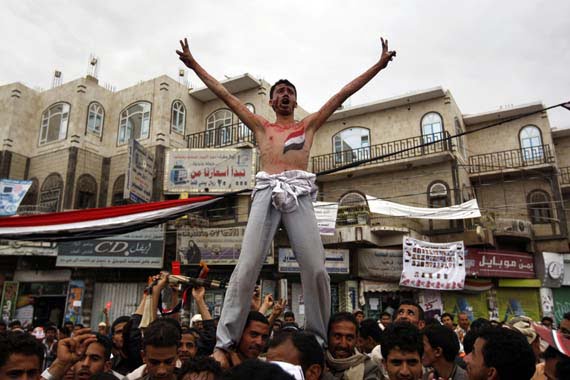 We are in an era where we are swinging between hope and despair. More things push us towards despair than what makes us hopeful. Recently, I read two news stories about Yemen; one hurt my hope, the other refreshed it.

Yemen is a poor country, often mentioned in the world media because of Al-Qaida terrorist attacks. Once a country is infected with problems of extremism, radicalism, terrorism and human rights violations, we may deduct that it will take a considerable amount of time to heal such diseases.

Countries like Yemen, which have long been suffering from terrorism along with poverty and educational problems, may be cured, in the medium or long run, by investing in education and efforts towards eradicating poverty. In fact, deep social problems like poverty and ignorance may lead to terrorism, as there is already sufficient environment for recruiting new members to terrorist groups. Here is the news that saddened me.

At least 13 soldiers and 13 suspected al-Qaida militants were killed in an attack on an army base in the southern Yemeni province of Abyan on October 19, 2012. Two militants wearing army uniforms drove an explosives-laden car into the base, killing themselves and 10 soldiers and injuring 15 other soldiers. (1)

Two days after this disheartening news, our hopes were refreshed, as a Yemeni-Turkish School was opened in Aser neighborhood of Sana’a, the capital city of Yemen. The school was funded by Turkish businessmen and began construction in February 2011. Yemen’s Prime Minister Mohammed Salem Basindawa and Turkish Foreign Affairs Minister Mr. Ahmet Davutoglu were both at the opening ceremony. (2)

This school is that newest addition to the chains of Yemeni-Turkish schools that opened its first location in 1998 with only 33 students. Currently these schools serve more than 1200 students.

In fact, these schools are inspired from a global civil society movement, the Gulen Movement, which is inspired from the ideas and ideals of eminent Turkish Islamic scholar Fethullah Gulen. Gulen movement has invested in education in more than 130 countries. Although opening schools all over the world is considered ‘investment in education’, it is in reality a philanthropic gift to those countries and their peoples without any material expectation.

Gulen encourages people to solve three basic problems facing most of the nations in the world – ignorance, poverty and disunity. Inspired from Gulen’s ideas, many businessmen from Turkey support financially educational projects around the globe in order to fight these three problems and they invested $6.5 million in the newest Yemeni-Turkish school.

According the their website, Yemeni-Turkish schools pursue the policy that full cooperation between the school and the parents is a crucial factor for the development of students’ potentials. (3) According to this pedagogy, school is the smiling face of education. Teachers are filled with tender feelings toward the students. Students then become the brilliant future of the world. They teach respect for diversity in this tribal country. These schools are equipped with modern technology such as classes with smart boards, and multimedia systems. They try to discover talented students and support them to improve their talents. This is the environment inside the Yemeni-Turkish Schools.

But, what is happening outside?

Fifty percent of Sana’a does not have basic utilities. You see all around soldiers who carry heavy guns. You may see even civilians who carry guns. They just pass by you!

Turkish businessmen make their donations to good causes under such circumstances in order to spread love. Fethullah Gulen says, “if we do not plant the seeds of love in the hearts of young people, whom we try to revive through science, knowledge, and modern culture, they will never attain moral perfection.” (4)

Gulen and those who are inspired by him, whether they are businessmen or teachers at those schools, are trying to build a long-awaited civilization. This civilization may only be built on unconditional love and respect for all creation as God’s creation. The best way to achieve this ideal is investment in education.

We are in an era in which we are swinging between hope and despair. I am personally hopeful. A bright future is awaiting us.

Levent Koç* is former director of the Peace Islands Institute.