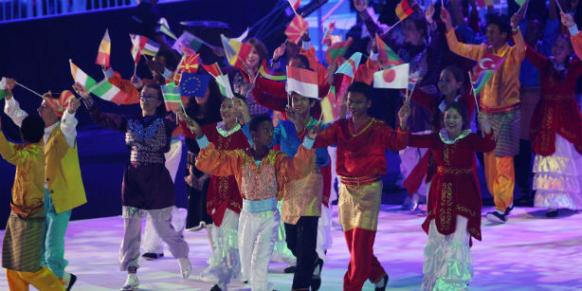 Foreign students from Gülen movement-affiliated schools in 100 countries participate in the Turkish Olympiads and give messages of peace through their songs to the world every year. (Photo: AP, Mohammad Hannon)

“This is most unfortunate, as anyone who does the minutest amount of research would clearly see that [the Islamic State of Iraq and Syria] ISIS does not follow the teachings of Islam,” says Joyce Davis, speaking about the bigoted comments of Bill Maher, who simplistically identified ISIS with the religion of Islam on a TV show last week. Davis is president of the World Affairs Council of Harrisburg, part of the World Affairs Councils of America, based in Washington, D.C. She is the author of two books on Islam and has written extensively on international affairs and US foreign policy.
Ms. Davis says there is a great deal of ignorance about Islam’s teachings and an inability among wide swathes of American society to distinguish between extremists and devout Muslims. “Many Americans see Muslims as violent, anti-American and backward. They are unaware of the great debt world civilization owes to Muslim thinkers, from mathematicians to philosophers. And they are ignorant of the history of the Islamic faith and its attraction for more than 1 billion people,” Ms. Davis says.

Ms. Davis believes that promoting peaceful relations between peoples and a tolerant, loving view of Islam will help reduce violence in the Muslim world by providing a different example of Islam, especially among the youth. “Moderate voices such as those of Mr. [Fethullah] Gülen’s movement are sorely needed so that both Muslims and non-Muslims have a more accurate appreciation of the teachings of Islam,” she adds.

Could you please tell us about the image and perception of “Muslims” in the Western mindset?

The perception of Muslims in the West varies greatly, depending upon the education and international sophistication of the individual. People who are not well-traveled and who are not well-educated generally have gross misperceptions and misunderstandings of Islam and about Muslims. There is a great deal of ignorance about Islam’s teachings and an inability among wide swathes of American society to distinguish between extremists and devout Muslims. Many Americans see Muslims as violent, anti-American and backward. They are unaware of the great debt world civilization owes to Muslim thinkers, from mathematicians to philosophers. And they are ignorant of the history of the Islamic faith and its attraction for more than 1 billion people. This continuing ignorance of Islam in America persists despite the online access to sources of authoritative information in English and to the availability of the Al-Jazeera network on cable TV. Unfortunately, while Americans now have more easy access to news and information than ever before, too many lack the curiosity and desire to learn to benefit from it.

What do you think about the factors that created that image and perception?

Intellectual laziness and cultural isolation are the main reasons for the false perception of Muslims. In addition, the mainstream media focuses too often on negative news and stereotypes, which feeds the ignorance that is so rampant in American society about the Muslim world.

How do you define Islamophobia? Is it increasing in the US?

Islamophobia is fear and mistrust of Islam and Muslims. It certainly increased after Sept. 11, 2001, and provocative developments such as reports on the brutality of the group known as ISIS or IS certainly contribute to the continued increase of Islamophobia. But there are many interfaith efforts in the US aimed at reducing this fear and helping people gain an appreciation for Islam and other faiths.

But don’t you also think that Islamophobia has always been in the West?

It is true that there has been a long-standing wariness of Muslims in the West, especially in Europe, which has felt its culture threatened by the dynamism of Islamic civilizations in North Africa and the Middle East. In some ways, Muslims have more protection in the US due to laws protecting religious freedom. But while there have been more legal protections and official recognition of Islam in the US, the widespread ignorance among ordinary people breeds mistrust and fear.

How do you think the simplification and mischaracterization of Islam in the US media has been impacting the consolidation of Islamophobia in America?

The mischaracterization of Islam and the media’s failure to educate Americans on this important world faith has definitely fed the mistrust and fear some Americans feel toward Islam. Unfortunately, the American media has gone through profound changes in the economic recession, leading to cutbacks in editors and forcing reporters to sensationalize news reports to attract online readers. Reporters now must also be engaged in social media, taking photos and videos, in addition to writing their own stories. Few have time to really research and develop thoughtful reports. There is no doubt that the cutbacks in newspapers and news organizations throughout the United States is hurting American democracy and endangering global stability. In his book “Confronting Islamophobia in Educational Practices,” Barry Van Driel writes that Islamophobia is found in the education spectrum of the United States and states that science and humanities textbooks often carry implicit anti-Islamic messages. He also reminds us that notable Muslim scholars such as Muhammad al-Khwarizmi (one of the founders of algebra) and Jabir al-Hayyan (who influenced the development of chemistry) are conspicuously absent from American school textbooks.

How do you think these practices impact Islamophobia?

American students even at the high-school level are taught very little about Islamic thinkers and even Eastern philosophers and intellectuals. This lack of knowledge of the histories of other peoples and of their contributions to world civilization is rampant among American students. Many students don’t know that a Muslim thinker invented algebra or made significant advances in the sciences and mathematics. Many do not know of the great literary works of writers in other cultures or the artistic geniuses outside of Western cultures.

What do you think about Bill Maher’s arguments simplistically identifying the Islamic State of Iraq and Syria (ISIS) with the religion of Islam?

This is most unfortunate, as anyone who does the minutest amount of research would clearly see that ISIS does not follow the teachings of Islam.

In your book, titled “Martyrs: Innocence, Vengeance and Despair in the Middle East,” you shed light on the motivation behind the terrorism and ongoing violence in the Middle East. What would you tell us about what drives these people to terrorism?

I tell audiences when I speak about extremism that no one faith or culture has a monopoly on the abuse and misuse of religion. The KKK, an organization that terrorized African Americans and Jews for decades, called itself a defender of Christianity and American values. Yet Americans know this to be completely untrue. ISIS and other self-declared Islamic organizations similarly distort the teachings of Islam and do injustice to the millions of good, devout Muslims around the world.

What do you think distinguishes Mr. Fethullah Gülen and the Hizmet movement?

Do you think the American public is aware of the Gülen movement?

No, I don’t think the American public is aware of the Gülen movement. In fact, most people in Pennsylvania are unaware of Mr. Gülen or the Hizmet movement.

How do you think the vision of Mr. Fethullah Gülen helps to reduce violence in the Muslim world?

Promoting peaceful relations between peoples and a tolerant, loving view of Islam will help reduce violence in the Muslim world by providing a different example of Islam, especially among youth. Moderate voices such as those of Mr. Gülen’s movement are sorely needed so that both Muslims and non-Muslims have a more accurate appreciation of the teachings of Islam.

What do you think of Turkish President Recep Tayyip Erdoğan’s effort to damage the Gülen movement in Turkey and the world?

It is most unfortunate that Mr. Erdoğan has been recorded denouncing Mr. Gülen and the Turkish people who support his vision of a more peaceful world. Mr. Erdoğan is doing a great disservice to his country and to its image around the world in seeking to vilify the Hizmet movement without any justification. Mr. Erdoğan’s campaign against fellow Turks around the world is hurting his country and his government’s standing in Europe and the US.

Joyce Davis is president of the World Affairs Council of Harrisburg, part of the World Affairs Councils of America based in Washington, D.C. She is the author of two books on Islam and has written extensively on international affairs and US foreign policy. She worked for more than three decades as a journalist and served as a foreign correspondent and editor for major news organizations, including National Public Radio and Knight Ridder Newspapers. She was a fellow with the United States Institute of Peace and has lectured at the US Naval Academy, the US Military Academy at West Point, the National Security Agency (NSA), the John F. Kennedy School of Government and many other universities and international agencies. Among her awards and commendations are the Distinguished Service Award of the US Secretary of State’s Open Forum and the Muslim Public Affairs Council’s Free Speech Award. In addition, she twice received one of the highest commendations in broadcast journalism — the DuPont Columbia Award for international reporting. She also received an honorary doctorate in international affairs from the International University of Kyrgyzstan for her work in advancing freedom of the press in the countries of the former Soviet Union.