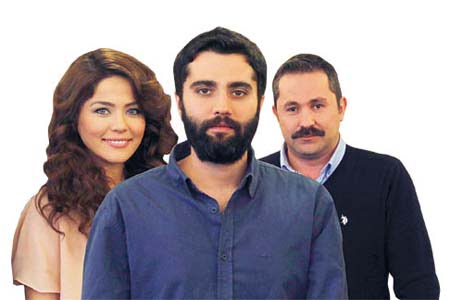 The new Turkish movie “Selam,” which opened in movie theaters last Friday, tells the stories of three idealistic teachers who have been appointed to teach at Turkish schools in three different countries.

Burçin Abdullah plays Zehra, who has been appointed to teach at a school in Kabul. Yunus Emre Yıldırımer plays Harun, Zehra’s colleague and a platonic flame who is appointed to teach in Senegal. And Hasan Nihat Sütçü plays Adem, who teaches in a school in Bosnia and Herzegovina to students from a mixture of ethnic backgrounds.

Directed by first-time filmmaker Levent Demirtepe, “Selam” is the first Turkish film to be shot on three different continents. In a recent interview with Sunday’s Zaman, the three leading actors of the movie recount their experiences during filming.

What’s the difference between acting in a fiction film and one based on true stories?

Burçin Abdullah: It’s easier to play in a fiction movie than in a movie based on true events. In fiction, you invent an imaginary realm and can outline your character in accordance with it. But here you have [people] that really exist. They [the filmmakers] told us, “Zehra is such and such a person, so act accordingly,” and so we did.

Yunus Emre Yıldırımer: As a viewer I always prefer movies based on true events, even when I’m watching a Hollywood or European production. They look more realistic. And it prompts you to research further and you feel glad that you watched it.

Did you have the opportunity to consult with teachers in overseas Turkish schools while developing your characters?

Hasan Nihat Sütçü: Of course. When you visit them, you see that what this movie conveys really does exist, that you’re not only telling the stories of just three teachers but thousands of them. The other day, Yunus made a very correct observation: “Those teachers didn’t complain of their situations and return [to Turkey]. We’ve experienced the dire situations they face, but they’re in it every single day.”

Did you actually meet the people who you play in the movie?

B.A.: We didn’t have the chance to meet them in person but we observed the teachers in the schools that we visited. They helped us a lot with the different languages we had to speak [in the movie].

Y.E.Y.: Fifteen years ago they were mere strangers, say in Afghanistan or Senegal. But of course they’ve achieved a certain level of familiarity by now. The circumstances in Afghanistan are still difficult. There was a war in Bosnia only 20 years ago, but now they’re better. Some places have become more civilized but there are still some places that you cannot change no matter how hard you try. Senegal is a country that has a [history of being under] colonial rule; it’s really difficult to intermingle with its people, but [Turkish teachers] have overcome that. So when you visit Senegal 15 years after [the first Turkish teachers went there], you’re warmly welcomed. That’s really important.

Senegal, Afghanistan, Bosnia. Did you know anything about these countries before you visited?

Y.E.Y.: I didn’t know too much about Senegal; I was expecting to see a wealthy country considering their rich natural resources. But it turned out to be very different. After a little bit of research I discovered that they actually had a corruption problem, that many things that could’ve been fixed were not. I’ve seen so many things there; there are really a lot of stories to be told.

H.N.S.: Yunus said there are things that don’t get fixed but I see [Turkish] teachers in those countries, teachers who have graduated from Middle East Technical University (ODTÜ) or Hacettepe University, as people who bring love to those countries, whereas they could have easily chosen to live [here] in better conditions. Through their efforts, just like shaping dough, they’ve managed to create loving children just like themselves.

How were you treated during your visits?

B.A.: Very well. They [Turkish teachers] came to help anytime we needed anything or faced a problem. They’re so knowledgeable about the places they’re working in; they even know the local police, the local merchants and even the ministers. … For instance, there’s a teacher named Osman in a school in Afghanistan; he’s my age but he’s been through so much which even a 60-year-old man can’t measure up to. It means a lot to have lived there for four years. When he first went there, they [the school] didn’t even have an accountant, so he did that for them. Currently he’s keeping the accounts for around 40 or 50 schools. The manager of the airport is an Afghan man who graduated from a Turkish school and he speaks Turkish as if it were his native tongue. He was so helpful, even during the security check at the airport.

How was the situation in Senegal?

Y.E.Y.: In Senegal, they were at our beck and call. They joined the film’s crew, they got headphones and supervised my French. I felt extremely sad having to leave the country. I visited other countries as well. If you were to ask me if I prefer Venice or Senegal, I would say Senegal. The people in the country are very sincere. I was playing basketball with the students, helping them in their studies and walking around with the teachers. On the last day of our stay in Senegal, they offered us gözleme [crepes filled with cheese, potato or spinach] which we ate happily [in the open]. There were eagles flying above a hill, but they did not notice us.

Did the teachers give you any tips as to how you should act?

H.N.S.: Yes, they did. In the film, there are scenes in which the school principal and I act out together. Compared to Afghanistan and Senegal, I felt quite at ease when I was in Bosnia and Herzegovina; I conversed with children in Turkish. Yunus tried to learn French, while Burçin endeavored to learn Pashto. We went to different geographies and encountered different cultures but we felt as if we were in the lands of Turkey. The Turkish schools are [part of] our motherland in the sense that Turkish Embassies are in foreign lands.

B.A.: When we were in Afghanistan, all the members of the film crew had dysentery; they all received treatment in hospitals. The director, the costume designer were all sick. We [the cast] tried to replace the crew members, preparing costumes with the students of the Turkish school in Afghanistan. When we [had to] speak in Pashto in some scenes of the film, those students were supervising our intonations as we did not know their language. [When something went wrong] they shouted for us to stop, and they would tell us when we pronounced a letter incorrectly.

Were you able to learn those people’s language well enough to converse with them?

Y.E.Y.: One of my friends studying at İstanbul’s Galatasaray University, which provides education in French, helped me to learn the language. I memorized [some daily French expressions] and went to Senegal. The child actor I was acting with was joking around with me, saying it is as if I was using Google Translate [while learning French]. I had to learn the correct pronunciation of French words in just three or four days; it was very challenging. However, to play the Anatolian people, who cry or laugh and who do not live in extremes, was not difficult at all.

B.A.: They liked my intonation; they said I spoke their language as if I were a native. I said my great-grandfather was from their country.

H.N.S.: I also had difficulty in conversing with people in their native language. The children I worked with do not know Turkish. They were not students of the Turkish school. They just memorized their parts in the screenplay; they had trouble in acting according to the spirit of the film. Our acting coach Figen Adıgüzel worked with them individually [to fix the problem].

What country had the most challenging conditions?

H.N.S.: Both of my friends played in a foreign country and language. When I compare myself to them, I did not have any difficulty. It was as if I had gone on vacation. They contributed more to the film than I did.

Y.E.Y.: No matter what happened, I was able to have some snacks when I got back at the dormitories we stayed in. But Afghanistan was different than the other countries [I had more difficulties in the country].

B.A.: They are telling the truth. In Afghanistan, we could not eat anything; we just had fruit for days. Instead of water, we drank ayran. Except for these, everything was fine. Sometime ago, people asked me if I would like go to Afghanistan on vacation. [I said] no, I would not. But you go there for business. We were part of the first-ever Turkish movie filmed in Afghanistan. Most of the people do not have the chance to see these countries and be part of the firsts. So I am happy and consider myself lucky.