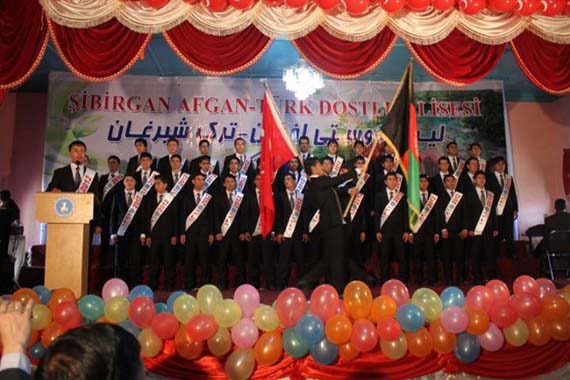 Turkey is continuing to invest in Afghanistan’s future by building schools countrywide. The most recent of them, a high school built by the Turkish Cooperation and Development Agency (TİKA) in the town of Kızılayak in Sheberghan province, was opened on Wednesday.

The ceremony was attended by Mohammad Hashim Zari, Sheberghan’s governor, Özgür Arman, Turkish consul general in Mazar-i-Sharif, and Abdulkerim Mahdum, the leader of the Turkmens living in Afghanistan, as well as the students and their parents.

Zari told the audience he was grateful to Turkey for its educational contributions to his country as the contributions will help thousands of students complete their education. The Afghan governor stressed the significance of education as one of the priority needs for people in the region.

“The first things we will do for our country will be to overcome school, road, and water problems. If we oppose ignorance with education, our future will always be bright. Our distress has for lasted for 30 years. Stability cannot be established when rooted in ignorance,” said Zari. Arman expressed his satisfaction at the opening of the school and pledged continuous contributions to Afghanistan. Drawing attention to the fact that the high school in Kızılayak is approximately the 30th of its kind built by the Turkish state, Arman added  such projects will continue.

A female student at the newly established high school, Nesime Mohammedi, voiced the happiness of her friends. “Turks extended friendly hands to us 80 years ago, too. We will never forget this and will always be thankful to them,” she said. The school will serve 700 students and 19 teachers. Its construction cost $170,000.

Haci Kemal Tajik-Turkish Schools operating in Tajikistan recorded another victory in the science olympiads held in Kazakhistan. The schools’ team ranked second, winning one gold and two silver medals. Following their arrival back in Tajikistan, the contestants having represented the country were received by Minister of Education Nuriddin Saidov. The Minister congratulated the team on […]