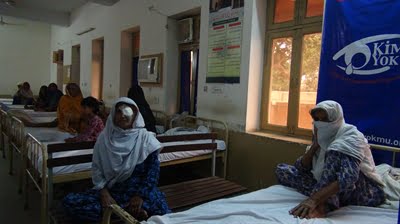 From 2014 on, the foundation targets three hundred monthly and about 5 thousand annually. With the aid campaign cementing the Turkish-Pakistani ties, the locals will be able to receive surgeries at no charge. The doctors assigned with this project will perform screenings monthly at schools in impoverished regions. Students at those schools will receive further treatment and medication at no charge.

Prominent statesmen were in attendance of the inauguration of the project in Dare Ismail Khan. Khyber-Pakhtunkhwa’s minister of revenue Ali Amin Gandapur, Pakistani Federal Parliament’s former deputy-speaker Faysal Kundi, Dare Ismail Khan’s deputy governor Irfan Mesud and KYM’s director in Pakistan Ozcan Inan were present at the gathering. “Eye is one of the most important organs of a human being. On behalf of this state and the city, I would like to thank Kimse Yok Mu and Turkish people for all their assistance,” Kundi remarked.

“KYM has been offering a cure to the poor here. I would like to thank for such a great help,” the minister Gandapur said.

The patients also expressed their gratitude to the Turkish donors. “We have them in our prayers,” they said. Among those showing up for surgery was a 110- year-old patient. The old patient had his granddaughter with him. They both thanked Turks for their donations.

Excerpted for the article published [in Turkish] on Cihan, 16 June 2014, Monday