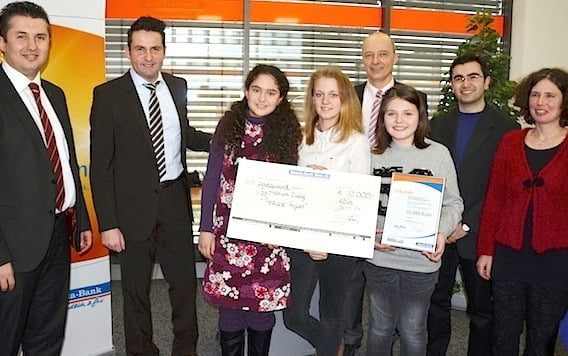 The Turkish schools established abroad by Turkish entrepreneurs keep riding high in their host countries. Though attacked unjustifiably since the December 17th probe at home, the schools have a track record of ever-growing achievements abroad.

In his address at the ceremony, Ralf Görres, Manager and Social Project Coordinator at Sparda Bank Koln, reported they received 332 project entries later rated either online or via SMS by 563 thousand people. The bank gave away prizes in the amount of €42 thousand in total.

The prize boosts morale and motivation

Genc Osman Esen, the administrative principal of Gymnasium und Realschule Dialog, said, “This prize came as a morale and motivation booster for all the schools established by Turkish entrepreneurs. It confirms that these schools benefit the society with projects which are embraced by the German people and officials alike. Our project is aimed to assist the visually handicapped with reading and thus to raise our students as responsible individuals in fact. We have two other such projects on youth and counselling underway.”

The school’s history and biology teacher, Murat Aslan, coached the participant students Vildan Macit, Patricia Wisnewski and Rabia Aydogmus in their project. “Our project involves podcast-assisted reading of our school newsletter for the visually handicapped and its circulation at libraries,” Aslan explained.

Stefan Volker, the school’s principal, said, “This honor belongs to our students. We need to form a structured system for sustainable and effective endeavors. And we are going to spend this money on that.”

Excerpted from the article published [in Turkish] on Zaman Germany, 8 February 2014, Saturday.