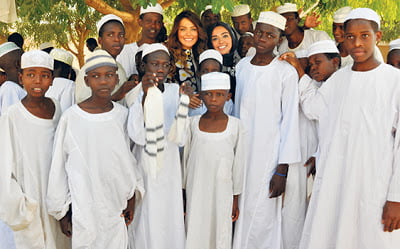 Actress Burcin Abdullah, starring as Zehra in the movie Selam -based on true stories of teachers at Turkish schools abroad- sponsored an orphanage in Khartoum, Sudan.

In the grand opening, attended by the Sudanese president Omar al-Bashir’s brother, Hasan Muhammad al-Bashir as well, Abdullah shared her feelings: “Can you believe that 60 children who had to sleep on the bare ground now have a home! How I wish we can reach out to everyone in need. I’ve come to realize it’s in fact a luxury to have a bed of your own. I hope more aid comes in for the orphan.”

The Sudan adventure of Selam’s leading actress started with her encounter with Kimse Yok Mu Foundation. She once went to the foundation’s headquarter located in Sultanbeyli district to find out that donations for water wells in Africa increased five-fold, which used to be 4-5 monthly, upon the movie’s release. She inquired particularly about the foundation’s efforts intended for the orphan and hit the road for Albania. When back in the country, the only question lingering in her mind was “How can I contribute?” Abdullah volunteered to sponsor an orphanage in Khartoum, without a second thought, when she was informed by foundation’s officials on the conditions the Sudanese orphans are in.

She was impressed to see the Sudanese people still able to smile despite the circumstances. “It’s great to see the children -even at the orphanage in worst condition- did not hold back their smiles when said “Hi!”. During her stay in Sudan, she also met the unnamed heroes depicted in the movie. “It’s easy to see the light in their eyes. It would be an honor for us if we’ve been able to touch their hearts with our performances. The only thing they demanded when they saw us was the movie’s sequels. We were able to portray only three but there are so many of them around the world. We’ve met the teacher Huzeyfe, for example. He’s married to a Sudanese. Who knows what he went through here in Sudan,” she remarked.