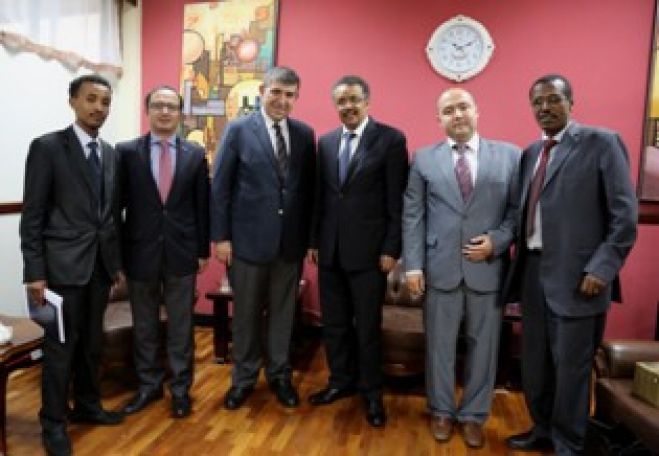 Dr. Tedros told the delegation that the Government of Ethiopia deeply valued the relationship between Ethiopia and Turkey.The Minister said Ethiopia welcomes Turkish industrialists and business persons to participate in the selected priority areas including industry, manufacturing, agriculture and trade. He emphasized that the Ministry of Foreign Affairs and the Government in general would offer every support for investors coming to Ethiopia.Dr. Mustafa Gunay, TUSKON’s Vice-President, briefing Turkish investments around the world, stressed that Turkey was very interested to invest in Africa now and particularly in Ethiopia, which he called the heart of Africa. Following detailed discussions, TUSKON representatives agreed on plans to encourage dozens of Turkish businesses to invest in Ethiopia. TUSKON is a confederation of business men and industrialists with 55,000 members.Source: Ministry of Foreign AffairsPublished on ertagov.com, 21 August 2014, Thursday

Arinc said: “I give my thanks to all my brothers and sisters who came here from Turkey with enthusiasm to open these schools and who enjoy working here with devotion and pleasure.

The recent visit by a Turkish business delegation to Morocco has seen companies secure textile deals worth $30 million, the Turkish Confederation of Businessmen and Industrialists (TUSKON) has announced.TUSKON brought 44 members from the textile sector to meet 310 of their Moroccan counterparts at the Turkey-Morocco Textile Business Forum over the weekend. The forum was […]