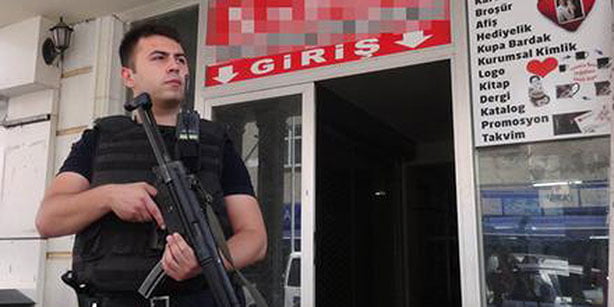 An armed police officer stands in guard outside of a prep school in Aksaray. (Photo: Haberdar)

In central Turkish town of Aksaray, dozens of inspectors, coupled with at least 300 police officers from smuggling and organized crime units, raided schools and prep schools on Tuesday. The raids are part of a nationwide crackdown on institutions and individuals somehow linked to the Gülen movement. President Recep Tayyip Erdoğan accused the Gülen movement of orchestrating the graft investigation against him and his inner circle. Gülen movement denies the charges. Since the allegations were surfaced nearly two years ago, the authorities have only escalated raiding, shutting down or defaming institutions or individuals close to the movement.

The educational facilities have been the subject of repeated raids in the past two years. This time, the institutions’ lawyer Sebahattin Batur said, they “stormed” the schools. He said the schools are always open to inspections and the school officials have been helpful to the inspectors. The Tuesday’s raids, however, are part of a campaign to defame the schools, put pressure on employees and discourage parents to enrol their children just weeks before the school registration period, the lawyer said.

Following the raids, the police detained five suspects and issued an arrest warrant for another on charges of “financially supporting the organization,” referring to the Gülen movement. The suspects are accused of providing financial support to students in need and paying their tuition.