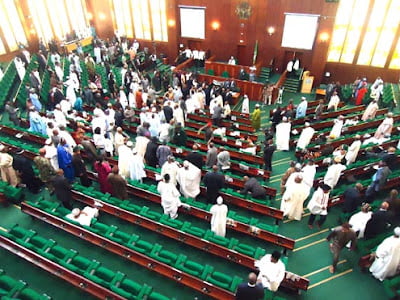 The House of Representatives on Tuesday issued a seven-day ultimatum to Turkish Government to release over 50 Nigerian students being held in detention.

The students are studying at the Fatih University, one of the institutions owned by the Gulen Movement, which the Turkish government claimed was a terrorist organisation that planned the failed coup in the country.

The resolution of the House was sequel to the passage of a motion sponsored by a member Honourable Solomon Bulus Maren (PDP Plateau) under matter of urgent National Importance.

The House called on the federal government to urgently deploy all diplomatic options to ensure their immediate release.

The Committees on Diaspora, Education, Foreign Affairs and Interior were also mandated to investigate the circumstances around the detention of the students, and proffer solutions to avoid repeated incidents.

According to SaharaReporters, the Permanent Secretary, Federal Ministry of Foreign Affairs, Ambassador Sola Enikanolaye, has said that the Nigerian students who were arrested in Turkey may have been paying for the refusal of the Nigerian government to shut down some Turkish schools and institutions in Nigeria.

“The Federal Government cannot close schools owned by private individuals that have not been proven to be in violation of the Nigerian or international laws in our country as doing so will amount to expropriation of private property,” Enikanolaye was quoted has saying.

Reports also say some students were deported from the country.

One of them, Rukkaya Usman, speaking to The Cable, said that she arrived in Turkey at 8AM on September 26, but that she was detained at the airport for about 10 hours after which she was placed on  a plane and flown back to Nigeria.

“As I got to the airport, at the immigration; they (immigration officers) collected my passport and resident permit. They started to ask me questions like: ‘what are you studying?’ ‘What’s your father’s name?’ They took my passport. This was on September 26. I asked what was happening. But they said they didn’t know, that it was a new law, that they were sending me back to my country,” Usman narrated.

This follows the statement by the Charge D’Affaires of the Nigerian Mission in Turkey, Ibrahim Isah, that two Nigerian students had been in detention for more than two months at the Silivri Prisons in Istanbul, Turkey, for allegedly being members of the alleged Fethulla Terrorist Organisation (FETO).

Isah said the students, Hassan Danjuma Adamu and Muhammad Alhaji Abdullahi, who are on the scholarship of the Yobe State Government, had completed their programmes and were waiting for their certificates before their arrest.

Isah said that the students’ offence was that they were living in a hostel facilitated by the International Students’ Association, an organisation believed to have links with FETO.

“According to Mohammad, they were preparing to vacate the hostel on that fateful day, having heard that the so-called International Students’ Association was being linked to FETO and that the hostel was under investigation. Unfortunately for them, the hostel was raided before they could move out. They believed that the police were given prior information of the presence of foreign students in the hostel.

After the raid, nothing implicating was found on them except three religious books that the police believe were incriminating. Both denied ownership of the books which seemed to put to rest any doubts in the minds of the police that they were members of FETO. Thus, they were immediately arrested and taken to the police station for interrogation and subsequently transferred to Silivri Prisons,” Isah said.