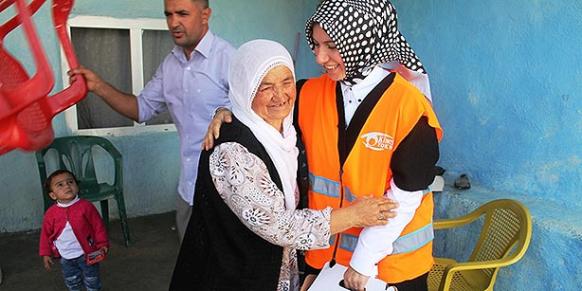 A woman in the village of Bilge in Mardin province greets a Kimse Yok Mu volunteer (R) during an aid mission on Oct. 5. (Photo: Cihan)

Following this move, the aid organization applied to the İstanbul Governor’s Office for permission to carry on these seven projects. The governor’s office has not yet replied to the organization’s request.

When reactions mounted against the Cabinet decision revoking the organization’s permission to collect donations, Deputy Prime Minister Bülent Arınç said, attempting to assuage these critics, that “a two-line petition” would be sufficient for the organization to be granted permission for its aid projects.

Kimse Yok Mu President İsmail Cingöz has criticized these efforts to obstruct the aid activities of his organization, noting that they are victimizing millions of needy people.

“These aid campaigns, which are taking relief to Gaza and Syrian refugees, offering medical examinations and providing clean water to people, are the hope of around 10 million people. Winter has come. There are Syrian refugees, and some are in camps and some are not. There are orphanages we look after and relief activities in Gaza and Palestine. There are well projects and cataract patients waiting for us. We gave a promise to these people beforehand. The aid activities need to continue. We can’t delay our aid activities for three minutes, let alone three days. Among the projects waiting for permission there is also one concerning the reconstruction of damaged schools in the country’s east and southeast,” said Cingöz.

The seven aid campaigns that Kimse Yok Mu needs permission for are relief activities in Gaza and Palestine, the construction and maintenance of orphanages in Africa and other places, the provision of relief and scholarships to orphans, the reconstruction of schools that were burned down in Turkey’s east and southeast, the offering of medical examinations and cataract surgery projects in Africa and other countries in need, aid campaigns for Syrian and Iraqi refugees, clean water projects and urgent humanitarian aid activities in disaster-stricken regions. Cingöz explained that none of these aid projects are for the benefit of Kimse Yok Mu. He said the governor’s office has had two months to respond to their petition and that it is using this authority arbitrarily to hinder the organization’s aid activities.

Cingöz also said the attitude of the governor’s office’s shows that it is not as easy as writing a “two-line petition,” as claimed by some Deputy Prime Minister Arınç.

Kimse Yok Mu is the only aid organization in Turkey that holds UN Economic and Social Council (ECOSOC) special consultative status, and it began to develop internationally recognized relief programs in partnership with the United Nations Human Rights Council (UNHRC) in 2013. It was also awarded the Turkish Parliament Outstanding Service Award in 2013, under the Justice and Development Party (AK Party) government.

However, a campaign to smear the organization was launched after the breaking of a Dec. 17, 2013 government corruption investigation into leading AK Party figures. President Recep Tayyip Erdoğan, who was previously prime minister and AK Party chairman, has targeted Kimse Yok Mu, which is affiliated with the faith-based Hizmet movement, due to an apparent government grudge against the movement, which it holds responsible for the corruption investigation.