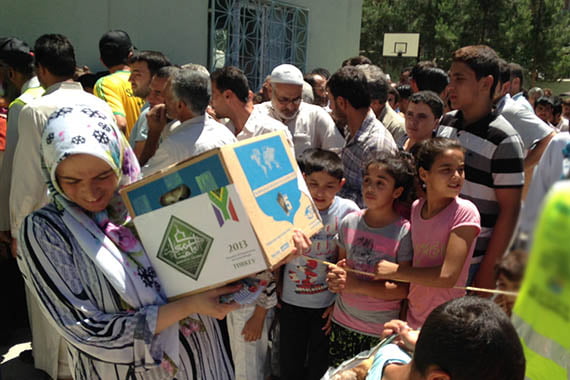 A truck filled with aid packages sent by Turkish charity Kimse Yok Mu (Is Anybody There) arrived at the Kawrgosk refugee camp in northern Iraq on Thursday, and its contents were distributed to Syrian refugees who have fled ongoing fighting amongst various factions in Syria.
Recent clashes between an al-Qaeda affiliate and the Democratic Union Party (PYD) — a Syrian offshoot of the terrorist Kurdistan Workers’ Party (PKK) — have displaced Syrians and forced them to flee to neighboring countries. Iraq has built refugee camps in the provinces of Arbil, Dohuk and Zaho to host the Syrians fleeing the civil war in Syria. Some 20,000 Syrians have flooded into Iraqi Kurdistan in the past couple of weeks, many of them suffering from health complaints due to high temperatures, sometimes reaching 50 degrees Celsius. Those affected, especially children, have received help from the Kurdistan Regional Government (KRG) as well as the international community. International aid supplies of tents, medicine, food and clothes have been sent from all over the world.

Kimse Yok Mu was the first civil institution in Turkey to send supplies to one of these camps. A truck full of food and clothes set off from Diyarbakır province to the Kawrgosk camp. The truck was escorted to the camp by Arbil district Governor Rizgar Ali and the supplies were distributed to the refugees. Ali expressed his gratitude to the charity and stated that it was the first time they had received help from a civil institution in Turkey, commenting, “These aid packages will strengthen the bond between Muslims.”

Kimse Yok Mu Diyarbakır office head Ahmet Dabanoğlu stated, “We help people in need all over the world without discrimination,” adding that additional supplies are currently being organized.