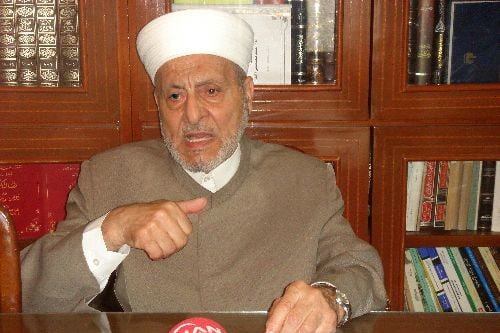 Leading Islamic scholar Wahba Mustafa al-Zuhayli from Syria, a participant of the two-day “Prophet’s Path Symposium” held over the weekend, October 9and 10, 2010, said the ideas of well-respected Islamic scholar Fethullah Gülen stand as a hope for humanity.

Defining Gülen as a person with a wide horizon, he said the fact that Gülen adheres to Islamic values and that he does not draw opposition is met with admiration from the Islamic world.

Noting that Gülen gives hope to the Islamic world with his teachings, he said Gülen has shown that the future of humanity is bright.

Gülen is a Turkish Islamic scholar well known for his teachings promoting mutual understanding and tolerance between cultures. One of the world’s most influential Islamic scholars, Gülen came out at the top of the list of “The World’s Top 20 Public Intellectuals” by the magazines Foreign Policy and Prospect in 2008. Now residing in the US, Gülen has pioneered educational activities in a number of countries along with efforts to promote intercultural and interfaith activities around the world. He has written nearly 50 books in Turkish, some of which have been translated into several languages.

Organized by the Yeni Ümit (New Hope) magazine and Hira magazine, the symposium took place at the Fırat Cultural Center (FKM) in İstanbul’s historic Çemberlitaş quarter. The two-day symposium drew in a large number of participants from both within and outside of Turkey.

Al-Zuhayli said he was impressed to see the majority of the symposium’s participants were young. Noting that the atmosphere at the symposium was a sign of love and loyalty to Prophet Muhammad, he said he found the event very successful.

Al-Zuhayli also praised Turkey’s recent moves in foreign policy. He said Turkey is improving its ties with the Islamic world and noted that he is also pleased to see the recently improved relations between Turkey and Syria. Al-Zuhayli added that Syria and Turkey are both Muslim countries and share the same goals. Stating that racism is one of today’s biggest problems, he said this problem can be eliminated by brotherhood and unity.

Expressing grief that Islam has a negative image in the Western world, he said Islam is in fact a religion that embraces everyone. He underlined that Islam’s connotation with violence was caused by mistakes made by some people. Stating that terror can by no means be linked to Islam, he recommended Muslims around the world share the beauty of Islam with everyone.