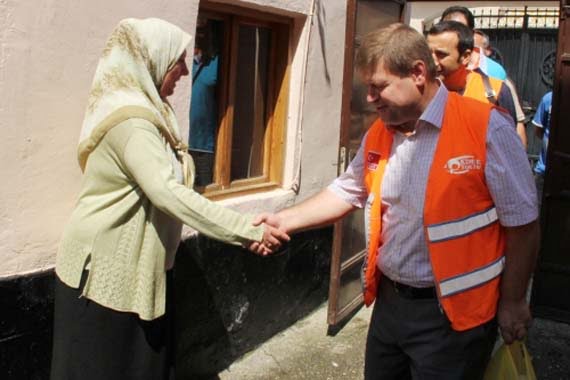 Kimse Yok Mu, concerned with the needy abroad as much as it is with those at home, delivered $10.000 worth of aid to those in need in Kosovo. Kosovan volunteers, in return, hosted their Turkish friends at a friendship iftar dinner.

Kimse Yok Mu, set to reach out to 103 countries around the world as a part of its Ramadan agenda, distributed $10.000 worth of aid to the needy and orphans in Kosovo still bearing the traces of the Ottoman. The iftar dinner hosted by the Kosovans who embraced the KYM Samsun volunteers reinforced the friendship in between, on the other hand.

KYM, which lends a hand to the needy and sufferers worldwide regardless of faith, ethnicity and language, continues to bring a smile to the world through its iftar and suhoor events in Ramadan, the month of cooperation and solidarity. In this regard, a team of KYM volunteer lawyers, businessmen, doctors and from the provinces Samsun and Ordu went to Kosovo, as a part of a trip organized by Samsun branch to deliver the aid.

The delegation of volunteers having been greeted on arrival by their Kosovan counterparts at the airport moved on to visit the tomb of the Ottoman Sultan Murad I in Pristina and got informed on its history. Next, they visited the local Turkish school, Mehmet Akif School, and left for Prizren. Despite the hot weather and fasting, the selfless volunteers delivered aid packages to the pre-selected families in need.

Following the aid distribution, KYM Kosovo volunteers held an iftar dinner in the honor of their counterparts who came all the way from Turkey to extend a hand to the needy in Kosovo. At the dinner held in a friendly atmosphere, KYM Samsun director Cemil Basbay noted that it’s their second time in Kosovo and said, “It was again Ramadan month when we came here for the first time last year. We’ve planned to distribute a total of 500 food packages equivalent of $10,000, which has been partially distributed as of today. Our local volunteer friends will take care of the rest. Here today, we’ve come together with the Kosovan volunteers and officials. We are feeling at home. Ever since its foundation, KYM has extended bridges between philanthropists and the needy not only in Turkey but abroad as well. We will carry on with our contributions.”

KYM volunteer Adem Guney noted that they joined the foundation’s trip as a whole family for most of the time and further said, “We’ve been able to experience KYM activities here. I feel wrapped up in another emotion at every trip. To gain the awareness of being an “ummah” is possible only through such a solidarity and cooperation. To breathe the same air with our brothers here makes us say: “So glad that we’re here.” We can’t help but feel touched to see people speaking Turkish and with a Muslim way of life, hundreds of miles away from Turkey.

“We are happy to have KYM foundation with us tonight. We would like to thank for the 500 food packages. We previously distributed the 2.000 packages of sacrifice meat, again, you sent us last year at Eid al-Adha. Thank you for your meaningful service,” said a Kosovan businessman, Ugur Toksoy. Another Kosovan, Ali Haydar Bulbul, similarly said, “We’re so thankful for your aid for Kosovans. Many thanks to KYM volunteers.”

The event came to an end with a trip to Macedonian city Skopje.

HASAN FATIH TÜRK, ROME Lawmakers, ambassadors, diplomats, academics and people from different walks of life came together for a friendship dinner in Rome on Thursday where they voiced their appreciation for the Hizmet movement and the values it promotes. The dinner, which brought together more than 200 people from different cultures, countries and professions, was […]