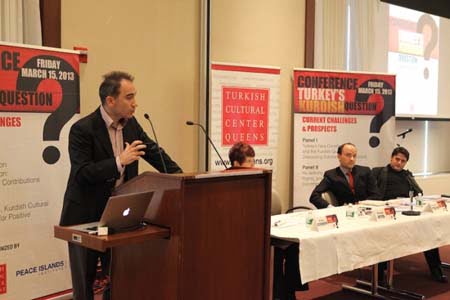 ‘Kurdish Issue’, one of the most controversial agenda items recently, was discussed at a panel attended by academics and journalists in New York. Among the keynote speakers of the event were Mucait Bilici from John Jay College and the journalist-author Mustafa Akyol.

Mustafa Akyol as the first speaker of the series recalled that it was 8th President of Turkey Turgut Ozal who pronounced the Kurdish issue officially for the first time in Turkey. Akyol stated that two different perspectives exist in Turkey, one of which defines everyone as “Turk” as it is based on “one nation” principle. “The former perspective is an old-fashioned one. I believe majority could understand that it is wrong. The latter, on the other hand, is “one nation-multiple ethnicities” perspective which I myself have adopted.

Akyol, who highlighted the impossibility of a geographical Kurd-Turk distinction and that Kurds outnumber other ethnicities in Istanbul, went on to say the two communities also have kinship ties through inter-marriages. A likely separation will bring serious problems along for both parties like in India-Pakistan case. Akyol revealed that he is supportive of the process AKP (Justice and Development Party) has employed to address the issue and continued: “Military involvement is not a solution for the Kurdish issue which instead needs a political solution. The government doesn’t consider PKK (Kurdistan Workers’ Party) the representative of the Kurdish people, which is the truth indeed. Turkey is debating how to disarm PKK. We as Turks owe an apology to Kurds as we refused their identity to date. We refused their existence and mocked their language.”

Another speaker of the event co-organized by Queens Turkish Cultural Center, Peace Islands Institute and St. John University was Loyola University Associate Professor Gunes M. Tezcur. Tezcur asserted that there is a little chance of success with the introduced process for solution. Noting that PKK has evolved into a company, Tezcur said “As long as PKK makes profit no one can shut it down. It has manpower, financial backup and training camps in Northern Iraq. It is not rational for PKK to close down when all these still exist.”

Presenting the statistical distribution of PKK’s activities since 2002 by year and his thesis that PKK will not abandon its terrorist activities, he concluded that “It is obvious that whenever a process for solution starts PKK activities intensify.”

As the last speaker of the first session journalist-author Aydogan Vatandas drew attentions the existence of international powers in the issue. Noting that various states have interests in Kurdish-populated region, Vatandas said that this factor has to be considered when seeking a solution.

John Jay University Assistant Professor Mucahit Bilici , at the second session of the panel, said that Turkey needs a new constitution. Bilici argued that people in Turkey have defined identity as “Turk”, “Muslim” and “Kemalist secular” for years and among them only “Kemalist secular” description has been abolished recently.

“I have no reservations about natural assimilation. As long as it happens through political ways, I am fine with that” said Bilici and proposed renaming Turkey as a part of solution for the issue. Bilici who is against a race-based name continued: “My approach to the problem is Islamic and humanistic. First of all, identity and independence of an individual has to be recognized. Suppose that we rename Turkey with a word that has no ethnic connotations.”

Bilici critical of Imrali process commented that it is reducing the Kurdish issue to a PPK problem. “The state, to date, has claimed that PKK is not the representative of Kurdish people. However, it takes PKK as the only addressee concerning the solution today. AKP’s approach to the problem is wrong too. It acts like it is granting something out of mercy with an oft-voiced approach saying “The state has to extend it compassionate hand”.

Florida University faculty Mustafa Gurbuz, PhD, delivered a speech too in which he claimed that European Union accession negotiations are notably instrumental in the process for solution to the Kurdish issue. He additionally suggested that to find public support the issue must be discussed openly exerting “citizenship diplomacy” for solution.