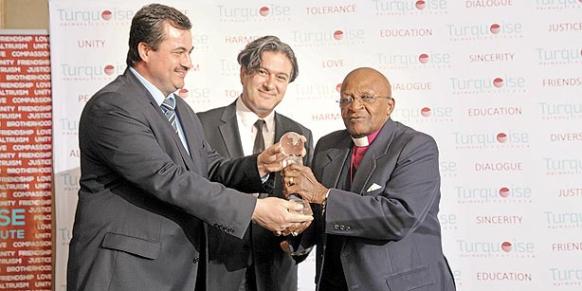 South African Archbishop Desmond Tutu, a Nobel Peace Prize laureate, was awarded the Fethullah Gülen Peace and Dialogue Award during the seventh annual Ubuntu Lecture and Dialogue Awards ceremony held in Johannesburg on Wednesday evening.The awards were organized by the Turquoise Harmony Institute, a dialogue center inspired by the prominent Turkish Islamic scholar Fethullah Gülen to promote mutual understanding and exchange between people from different cultures and religions.Archbishop Tutu accepted his award from Hüseyin Hurmalı of the Journalists and Writers Foundation (GYV), of which Gülen is the honorary chairman. Holding a speech after he received his award, Tutu said: “Wonderful thing to have a complexion like mine; you don’t realize when I am blushing. Adam could not be fully human on his own. We are programmed to be interdependent. I learn how to walk like a human being by imitating other human beings. We are fundamentally made for complementarity. A person is a person by other persons. To harm other is to harm oneself. ”

Underlining the importance of efforts that Turkish volunteers are expending to improve Ubuntu in South Africa, Tutu ended his speech with the words: “We have resources; it is an abomination if a child of this nation goes to bed hungry. Wake up, South Africa, to realize your potential.”

Tutu is a South African social rights activist and retired Anglican bishop who rose to worldwide fame during the 1980s due to his efforts against the South African apartheid regime. Tutu was awarded the Nobel Peace Prize in 1984; he also worked as the chairman of the Truth and Reconciliation Commission established in 1995, and known not only for his efforts to reinforce peace within South Africa but also as an aspiration for universal peace and struggles against dictatorial regimes around the world.

The Fethullah Gülen Peace and Dialogue Award is bestowed upon outstanding individuals or organizations that are seen to have made noteworthy contributions to dialogue, peace and harmony in the society.

It is well known that the institute is inspired by the peaceful teachings of Fethullah Gülen, whose decades-long commitment to education, altruistic community service, and interfaith harmony has inspired millions around the world. Gülen has reinterpreted aspects of Islamic tradition to meet the needs of contemporary Muslims.