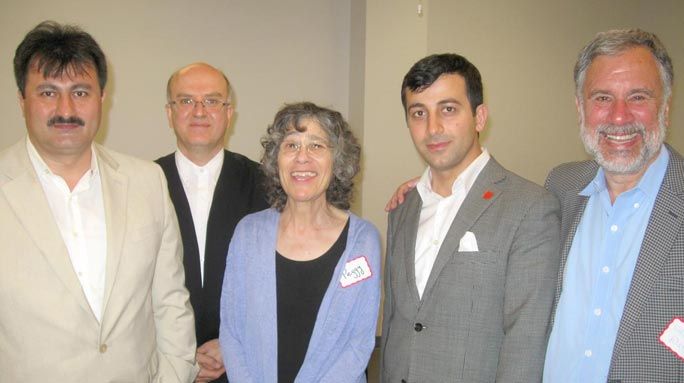 And like last year, it was so popular that people from both faiths had to be turned away.

“This is a great occasion for us to get together to love one another,” said Oguzhan Turan, Executive Director of the Turkish Cultural Center in Sunnyside.

“What we can do together to know one another and learn from one another.” He urged his congregation to get people’s phone numbers so they could be invited to Turkish family homes. “A person’s religion is more important than an organizational relationship.”

Ramadan is a time of fasting in the Muslim faith, when people are more sensitive to the unfortunate, and to “check ourselves to be a better person and with others.” Turan’s congregation is celebrating the Eid al-Fitr, the breaking of the 28 nightly Ramadan fasts, at religious and cultural centers with Hindus, Sikhs, and Christians.

Rabbi Robert Kaplan, director of the Center for Community Leaderships at The Jewish Community Relations Council, spoke of how Judaism and Islam believe not in multiple forces or multiple gods but “the belief in One God that rules the universe but also our lives.”

“God creates the world in diversity: people look, act, and believe differently,” Kaplan said. “Hopefully, we could find our way back to our oneness. The challenge is to find that oneness in all of us.”

Ibrahim Sayar, director of interfaith outreach at Peace Islands, quoted the Koran on God’s intention that people be diverse.

“We have created you from man and woman, made you different nations and tribes, so that you may know each other,” he said. “God wanted us to use our free will to live in harmony. It’s not us giving up our traditions, we learn from one another: live as a Muslim, live as a Jew, as much as you can.”

Sayar urged people knowing each other not from newspapers or magazines but “through experiencing each other … By sharing our bread, something magical happens.”

Rabbi Irwin Goldenberg spoke how a community’s connection is a form of spiritual connection. “A commitment to one another’s welfare can help us connect to God,” he said.

Walter Ruby, Muslim-Jewish Program Director with the Foundation for Ethnic Understanding, said after returning from a trip to Europe he met many Muslims who are prepared to march in solidarity with Jews.

“We refuse to be enemies” will be his organization’s theme during marches in cities across the world in November.

Sophia McGee from Queens College’s Center for Ethnic, Racial, and Religious Understanding spoke of the training students undergo for meditation and interfaith dialogue on campus.

“Queens College is often cited as the most diverse campus in the United States,” she said. “We can give to the rest of the world when different demographics can speak to one another and have empathy with one another.”

Music “to prepare our souls” before breaking the fast led to a Sufi song played on the reed ney flute by Yusuf Gurtas of Queensborough Community College. The Muslim call to prayer was led by Ali Incekana.

Water and dates, a traditional Muslim food to break the fast, were on the tables, as were pamphlets explaining Ramadan. People wore name tags and sat across long tables from each other. Ice-breaker ideas were on each table to foster dialogue while having Halal, Kosher and Middle Eastern food.

Danielle Ellman, executive director at the Y, held the event in large part because people leaving last year were already asking them to repeat the program this year.

“We wanted to continue the dialogue and we also wanted more people to be able to experience the event,” she said. “We hope to foster better understanding with our Muslim neighbors. As non-Muslims become more comfortable with their Muslim neighbors, we also know that we are helping Muslims learn about, and be more comfortable with, the Jewish community.”

She said they are planning to continue the dialogue, with smaller discussion groups and a number of other big programs —with the next event posibly being a dinner in the Y for Sukkah, a Jewish holiday, in the fall.

“It was so rewarding to see people really talking to each other,” she said. “We know that’s the part that people enjoyed the most.”

She said people already are asking about signing up for next year.