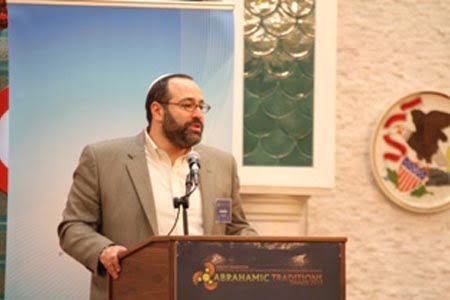 Christians, Jews and Muslims came together to discuss the significance of pluralism and coexistence at Abrahamic Dinner by Niagara Foundation in Chicago.

The annual held dinner took place at the newly-launched building of TASC (Turkish American Society of Chicago). Niagara Foundation President Serif Soydan delivered the opening speech of the night and left the stage to the faith leaders.

In their remarks, leaders of the three faiths pointed out that diverse culture and faith members can coexist respecting each other. Director of Center for Global Judaism Hebrew College Rabbi Or N Rose said, “What brought us around a table today is pluralism. We share countless common grounds but we have generally failed to realize and appreciate them so far. Sometimes, there have been intensive and even bloody rivalries between people of faith. We should, instead, enrich our values and build bridges of dialogue in between.” Rabbi Rose additionally stated that he agrees with Dr. Eboo Patel on necessity of dialogue education for the young generation.

We should recognize dissimilarities as well as common values

Rabbi Rose also commented that pluralism means to present ourselves as a body at the same time. Suggesting that we should recognize the dissimilarities as well, Rabbi said, “No two separate communities are identical just like two persons cannot be. We have to accept each other as we are.”

The US is the most religious western country

Rabbi Rose furthermore referred to the US as the most religious country and home to the highest number of diverse faiths, which was previously argued by Prof. Diana Eck too.

Next, Bishop of United Methodist Church Northern Illinois Conference, Sally Dyck underscored the significance of coexistence. Admitting its challenges as well, Dyck said, “It takes a while. It is not easy to achieve it but coexistence of different faiths builds up friendships and unites people in times of difficulties.”

The Qur’an calls for social cohesion

The founder and president of the organization Interfaith Youth Core, Dr. Eboo Patel quoted the verse from Quran that reads “God made human beings peoples and tribes so that they may know one another.” Dr. Patel who has a track record of interreligious solidarity activities said that it is God who created diversity after all. Narrating creation of Adam and that God taught Adam His names, he went on to say “God didn’t teach Adam just a single name, on the contrary, He taught him many of them. As you see they are plural names not singular. God’s creation is pluralist too.”

The US shouldn’t be a prejudice-dominated country

Another point highlighted by Dr. Patel was that the US should be free from prejudices. According to Patel people in many countries are poisoned with prejudices since their births, which is not the case in the US. He said that it might change in time and people of faith have a duty as it can be achieved only through cooperation. Patel concluded his speech with a poem.

Besides religious leaders, academics, various public officials and university students, representative from neighboring churches were present at gathering as well. Trinity United Methodist Church member Paul Hiberman, 65, gave his remarks on the event: “I am so impressed by the speakers. Particularly Rabbi Rose and Dr. Eboo Patel’s speeches struck me. Although we gathered with TASC members for an iftar (fast breaking) dinner earlier in our church, I haven’t been to such an interfaith event like this before. I studied at Lutheran College in 1960s when we have only a few different faith members around us. I met only a Jewish student and no Muslim at our school with 1300 students. So being present here tonight means a lot to me.”