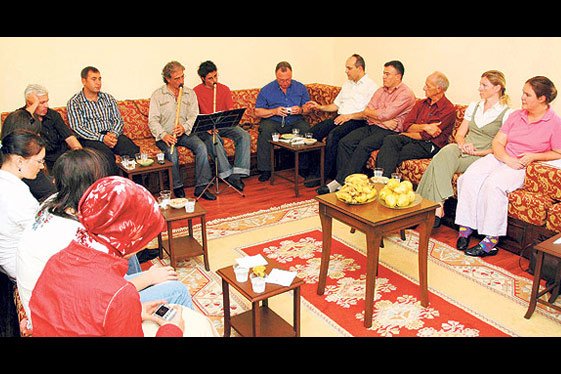 Among many other activities it organizes to strengthen ties between people of different religions and cultures, AKDİM also brings people together for artistics events.

Established six years ago in Antalya, the Antalya Intercultural Dialogue Center (AKDİM) has become one of the leading civil society organizations in the region, helping foreign residents living in and around Antalya to network with one another while teaching them about Turkish culture and language.

Sunday’s Zaman met with the organization’s secretary-general, İbrahim Kundak, to talk about their services and studies that are underway for new projects. Kundak says the organization helps establish healthy communication between local and foreign residents, while also planting the seeds of eternal friendship between generations in the region. “When we first opened this organization people ignored its importance. … But today many encourage us to continue our services; foreign residents have become a reality in the region and we all have to make sure we live in harmony with different cultures and nationalities,” he explains.

The official data from the regional police department shows that there are 30,000 settled foreign citizens in Antalya and the surrounding cities. According to Kundak, this number could reach 100,000 as high when taking unofficial numbers into account. “Studies and current trends show that the number of foreign residents in this region will reach 150,000 to 200,000 in the coming five years. This is an incredible number and we are ready to help our foreign residents better adapt to the local environment,” Kundak notes.

Kundak has served in similar civil society initiatives in Germany and in different parts of Turkey. He says they currently keep in touch with 2,000 foreign residents, some of them members of AKDİM. “This number is increasing quickly … people tell others about us and new visitors come to meet us every week,” he added.

One sad fact was that some people misrepresented Turkish society in the past and foreigners lost confidence in locals. Kundak says that “this mistake must be corrected.” That is the very reason for their establishment; AKDİM was opened to undertake this mission of correcting misunderstandings between peoples from different cultures. Russian and German expats make up the greatest segment among AKDİM participants and members, in parallel with the region’s foreign population statistics.

Kundak says they host and provide services for people from 31 different nations, including Cuba, Nigeria, the US and Lithuania. They also host visitors from abroad, for instance they have hosted 10,000 visitors from different states in the US with the help of partner civil society organizations in the country so far. They work in four languages in dialogue with these people; German, Russian, Turkish and English. Also, the organization’s website is in Turkish and German. Visitors fill in a form and provide their addresses to the organization so that they can keep in touch and stay informed about AKDİM’s activities.

“Learning the local language is of the utmost importance and we provide Turkish courses for people here,” Kundak continues as he notes that learning Turkish helps foreign residents accelerate their adaption to Turkish society and culture. “People are interested mostly in tours and Turkish classes. We organize trips and also provide Turkish classes with professional teachers.”

“These people are attracted by Turkish hospitality; we meet them and help them without expecting anything in return. People at first think that we will charge them for services offered here. When for instance we offer them tea or a meal, they think we will ask for money and when they see it is not the case they are surprised and impressed. We act with no thought for personal gain; this is something unorthodox and people like it,” he opines.

In addition to Turkish classes, trips around the country and charity activities, the most frequent activity AKDİM organizes is Tuesday tea meetings, in which 70 people participate each week. Kundak say they discuss current developments and plan new activities at the Tuesday tea. One thing that is crucial, Kundak adds, is that they organize all their activities in line with their members’ demands. “We sit, discuss and decide altogether,” he explains.

They also celebrate cultural and religious days like Christmas, Easter and Women’s Day, he states: “Russian residents, for instance, care a lot about Women’s Day and we celebrated this year’s Women’s Day with 80 Russian members; we organized a charity drive to help women in need. On Mother’s Day we chose the ‘Mother of the Year.’ These [activities] all are in line with members’ demands.” For the most part, businessmen and entrepreneurs sponsor most of the services and courses offered by AKDİM.

An encouraging development for healthy integration is that members voluntarily participate in charity organizations on Turkish religious days. “For instance, we distribute gift certificates to the needy for Eid al-Adha and our members contribute to such efforts voluntarily. We all respect one another’s cultural values,” he affirms. As regards feedback from the government, he says Culture and Tourism Minister Ertuğrul Günay visited them and congratulated AKDİM on their success. Kundak says some university students have even done their theses on AKDİM’s achievements as regards the integration of foreigners living in Turkey.

Dietmar Gentsch, a German mining engineer who settled in Antalya after retirement, is one of AKDİM’s members. Sunday’s Zaman met with Gentsch when he was at the center for Turkish classes with his teacher, Feyza Demirci. He say he discovered AKDİM four years ago and has been participating in activities ever since. “I learned about AKDİM during a meeting on aşure [Noah’s pudding] and later decided to learn Turkish at AKDİM,” he explains. Gentsch replies to our questions in relatively fluent Turkish. He says it is very interesting and exciting to have people from different nationalities under one roof.

Maria Ateş is also one of the participants in AKDİM. She recently married a Turkish citizen, Nuri Ateş, and says it was her husband who suggested visiting the organization. She has already started attending Turkish classes and is making progress, as her teacher Demirci says. Nuri Ateş says it was actually his friends who told him about the organization and that he is now happy that Maria is able to adapt to Turkish society faster than she normally would thanks to AKDİM. Maria Ateş says she is happy with the services provided by the organization and suggests that others become members as well.

Along with routine services, AKDİM also undertakes the organization of the Antalya part of the International Turkish Language Olympiads, held once every year. Last year they hosted 25,000 visitors in Antalya City Stadium last year and expect more visitors this year on June 27.

General assumption is that Erdogan is indeed playing a cynical game with the Gulen issue, and also involving the United States in this, in a populist effort aimed at his own constituency in the lead-up to the presidential elections in August, where he is expected to run.

A group of pro-Erdoğan Turkish Islamists came together in the city of Duisburg, Germany, and protested the schools operated and inter-cultural dialogue activities which have been carried out by the Turkish people who are affiliated with the Gülen movement.