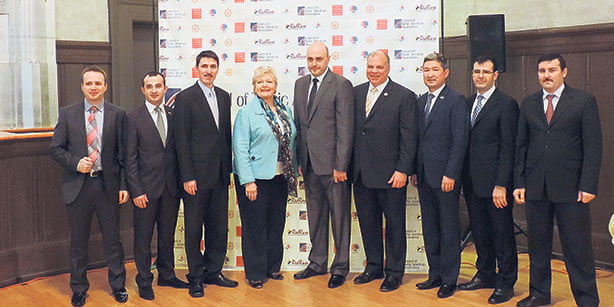 Members of prominent Turkic-American institutions pose together during a recognition ceremony on the annual “Turkic Cultural Day” in Trenton, New Jersey.

The day was officially recognized five years ago and has been celebrated ever since.

In his opening remarks the head of the Turkic American Council, Furkan Kosar emphasized the importance of building bridges through cultural organizations.

Stephen Sweeney, a Democrat from the New Jersey Senate spoke of the state as a melting pot of cultures.

Senator Diane Allen from the Republican party also commented on the future of inter cultural relations and sending a message of harmony to younger generations.

The event was attended by legislators, senators and elected officials.

It ended with a musical rendition in true Turkic tradition.

It was July 15. And what was happening, they soon learned, was a military coup. Gulen, who suffers from diabetes and heart disease, was distraught, Simsek said. Realizing “we couldn’t really do anything,” Simsek said, the group began to pray, loudly and together. Several wept. They didn’t stop praying until early the next morning.