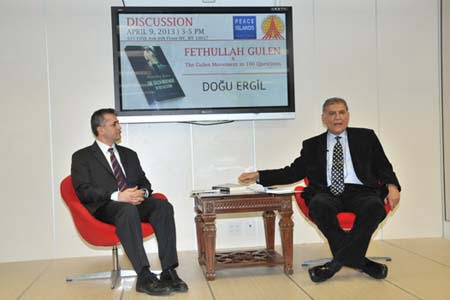 A special conversation on Fethullah Gulen and the Gulen Movementby Peace Islands Institute was held at NY Turkish Cultural Center on April 9.

The professor of Political Science and Public Administration, analyst and columnist Prof. Dogu Ergil was the guest speaker of the event hosted by Peace Islands Institute President Zafer Akin.

In his opening speech, the president of Peace Islands Institute Zafer Akin referred to Fethullah Gulen as a Turkish scholar, writer and an opinion leader and, speaking of the Movement, claimed that the contemporary world needs the Gulen Movement.

Based on Ergil’s book “Fethulllah Gulen and The Gulen Movement in 100 Questions“, the conversation shed light on questions in understanding both Fethullah Gulen, a moderate Turkish-Muslim scholar; and the Gulen Movement, a global network of volunteers, teachers, students, intellectuals and business people who are inspired by Gulen’s philosophy based on dialog and peaceful coexistence. Gulen’s worldview, his perspectives on society and the state and the Movement’s core principles were presented and reflected on as well as it is vital for making any sort of predictions about the direction that Turkey might be headed in the next years.

Professor Dogu Ergil noted that the Movement advocates interfaith peace by respecting each other’s faith and ethnicity around the world. He said that the Ottoman Empire achieved ruling over communities from diverse ethnic and religious backgrounds and Turkey alike is home to a population of the same diversity. Speaking of the schools, Ergil said children can receive a complete education at these schools starting from pre-school to higher education.