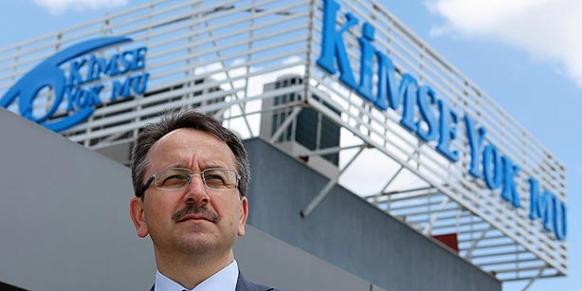 The president of the Turkish charity Kimse Yok Mu (Is Anybody There) has criticized people who accuse the organization of engaging in terrorist activities.

Last week, Turkey was shocked by a terror investigation against Kimse Yok Mu (KYM). According to a statement by the Ankara Chief Public Prosecutor’s Office, the organization was being probed over its alleged involvement in terrorism during activities during Eid al-Adha.

In addition to attracting widespread public anger, the investigation also drew a rebuke from the KYM’s chairman, İsmail Cingöz, who called the probe a smear campaign. “To defame a non-governmental organization [NGO] that has done such good charitable work and that works for its nation heroically … To file a lawsuit against a charity on charges of membership of an armed terrorist organization … Even the cruelest person would not do something like that,” Cingöz said.

Listing the activities of the charity, Cingöz said: “The KYM was ranked among the 100 most active NGOs in the world by [Swiss non-profit group] Global Geneva. This is a first for Turkish NGOs. In its clean water projects, KYM has dug 2,130 wells in 19 different countries and helped some 5 million people improve their living standards. Building hospital complexes in five countries including Somalia, our foundation has been carrying out a host of international projects in the health sector. The number of people who have had cataract surgery alone has reached 33,000 and is expected to hit 60,000 by the end of this year.”

“The KYM has built dozens of orphanages in many countries including Burundi, the Philippines, Sudan and Chad and has provided a safe shelter for nearly 60,000 orphans. In addition, the KYM has constructed 36 schools across the globe and handed over the management control of them to either Turkey, the United Nations or local governments. … Our charity looks after 300,000 families — nearly 2 million individuals — in Turkey alone,” Cingöz said.

With its 210,000 volunteers, the KYM has been an advisory member of the United Nations Economic and Social Council (ECOSOC), Cingöz added. The charity has been honored by the heads of states and parliaments of 80 countries, such as the US and the Philippines, for its activities.