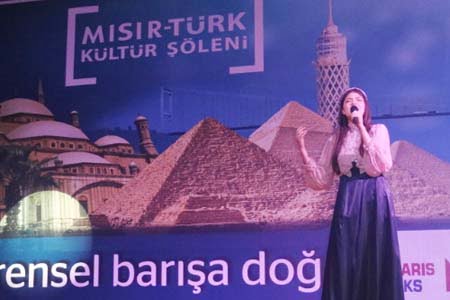 The carnival atmosphere by Egyptian students sweating out to qualify to represent the country at the coming 11th Turkish Language Olympiads created an unforgettable memory for the audience. The Turkish and Egyptian guests of the cultural festival held at Salahaldin International School in Cairo watched the singing, poetry and folk dance performances in admiration.

Prominent names from Turkey and Egypt attended the Egypt finals of the Turkish Language Olympiads titled “Egyptian-Turkish Cultural Festival”. The audience got emotional during the touching poems while they overjoyed with folk dances and songs from Gaziantep and Trabzon regions.

General Manager of Salahaldin International Schools, Orhan Keskin noted that Egypt is going through extremely hard times and, through such events, they aim to comfort the Egyptians and bring the two communities even closer. Keskin asserted that they are confident of success at this year’s Turkish Language Olympiads- to be attended by over 160 countries- like in the past Olympiads. Arabic songs and poems were also performed for the first time. Egyptian folk dances were performed too at the event hosted by Turkish and Egyptian students speaking in Arabic and Turkish respectively.

Besides Salahaldin International School participants, students from Turkology departments of Egyptian universities and Turkish cultural centers active around the country had attended the nationwide qualification rounds.

That events of this nature contribute remarkably to improve and enhance the mutual relations was underlined in the remarks by Turkish Ambassador to Cairo Huseyin Avni Botsali and Turkish and Egyptians officials. Egypt is rated among the favorite competitor countries particularly in singing and poetry categories of Turkish Language Olympiads.

The carnival atmosphere by Egyptian students sweating out to qualify to represent the country at the coming 11th Turkish Language Olympiads created an unforgettable memory for the audience. The Turkish and Egyptian guests of the cultural festival held at Salahaldin International School in Cairo watched the singing, poetry and folk dance performances in admiration. Prominent names from […]