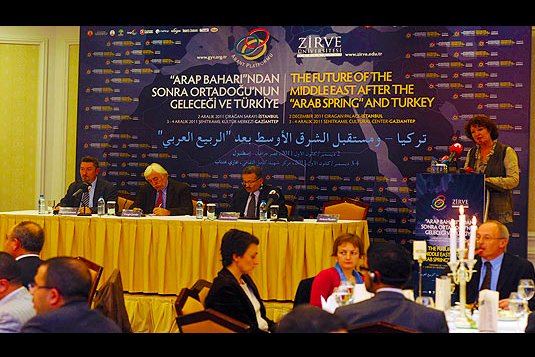 It was the 25th in a series of gatherings organized by Zirve University and the Abant Platform, yet this time participants found a rare opportunity to discuss political developments elsewhere and the possible role Turkey might have in this political turmoil.

A large gathering of Turkish and Arab intellectuals discussing the uncertain political trajectories of post-revolution Arab states has kicked into gear in a southeastern Turkish city on the border with Syria — a country that has put Turkey’s assertive foreign policy to a difficult test in the face of unrest that has been rocking the Middle East for nearly a year.

It was the 25th in a series of gatherings organized by Zirve University and the Abant Platform, yet this time participants found a rare opportunity to discuss political developments elsewhere and the possible role Turkey might have in this political turmoil.

Comprising largely Turkish intellectuals both from Turkey and from around the world, Arab and Western commentators, activists and professors also joined in during the three-day event. Discussions primarily centered on redefining the Arab Spring, ways to cushion the pain of the transition period in post-revolution Arab nations and Turkey’s contribution to political developments participants hoped signaled the birth pangs of consolidated democracies.

Turkey’s foreign policy, reoriented after Turkey blasted Arab rulers for shrugging off demands for reforms by risking its hard-won relationships, won many accolades from participants and panelists, but they agreed that Turkey’s assertive foreign policy might do more harm than good.

“Turkey had a marginal leadership role during the Arab uprisings. It is definitely an influential power, but it shouldn’t lead,” Mehmet Ali Birand, a veteran Turkish journalist, told participants during the second-leg of the event in Gaziantep, broadcast live by Turkish TV networks, including the state-run TRT Arabic.

Turkey exhibited flips flops in its foreign policy during the early days of the uprisings, which many claim caught it off guard, but it drastically shifted its position to the extent of asking Syria’s embattled President Bashar al-Assad to step down last week.

Unrest in these countries, among other consequences, put in jeopardy years of painstaking efforts to repair ties between Turkey and Arab countries. Despite claiming that it would not tolerate rulers killing their own people in response to demands for basic rights, observers assert that Turkey initially failed to walk the talk.

Ehud Toledano, a professor from Tel Aviv University, welcomed what he called Turkey’s more “realist and pragmatist” foreign policy, which he said shifted after Turkey realized it was on the wrong side of history in the early days of the uprisings in Arab countries. He added that Turkey has the advantage of better understanding the region because of its geographical and cultural proximity. Peter Bechtold, a former director of the Foreign Service Institute, said it is unfortunate and yet normal to observe that Turks and Arabs don’t know each other well.

In its uphill struggle to adequately deal with a crisis in Syria, Turkey exhibited several subtle indicators of its mounting impatience with Assad’s never-ceasing penchant for violence. It finally imposed its own mild set of sanctions last week, targeting only the Assad regime, in the hope that Assad will feel the noose tightening.

Participants and panelists during the conference largely warned that Syria is a tinderbox edging towards civil war, but limited Turkey’s capacity to offer a functioning solution to ending nine months of instability that have claimed at least 4,000 lives according to the latest UN estimates.

Birand and İhsan Dağı, a professor from Middle East Technical University (ODTÜ), warned against copying the Turkish model in which the military tries to position itself within the political system, referring to the apparent resistance of Egypt’s ruling military council to give up its privileges in a new and democratic Egypt.

Pakinam Sharkawy, a professor at Cairo’s American University, dismissed claims that Egypt, or any other Arab nations that have toppled their decrepit leaders this year, could return to a political structure where the military is dominant. She said the Arab Spring hit everywhere to varying degrees, including Morocco, whose king endorsed sweeping reforms this year — a development Turkey officially welcomed.

Dağı claimed that Turkey did not try to export its model to other Arab countries, while İhsan Yılmaz from Fatih University added that Arabs could learn from Turkey’s experience during their efforts to build new political institutions instead of copying the model.

Erşat Hürmüzlü, President Abdullah Gül’s Middle East adviser, officially confirmed that Turkey is not exporting any models but acknowledged that it is a source of inspiration in many ways and that Arabs are welcome to learn from Turkey’s experience. Dağı continued during a panel discussion by saying that Turkey’s Syria policy for years was valid and tried to integrate its southern neighbor — then an Iranian proxy with a leader close to being an international pariah — into the international community. “Turkey always pushed for reforms in Syria. What was wrong with Turkey’s Syria policy was that Turkey believed Assad and his circle could in fact reform,” Dağı underlined.

Hélène Flautre, co-chairwoman of the EU-Turkey Joint Parliamentary Committee, said in her speech during the conference’s İstanbul leg that while Europe could not realize what was happening in the Middle East, Turkey was touted as a model for Arab states. She praised the current government’s efforts to limit the military’s power in politics and welcomed Prime Minister Recep Tayyip Erdoğan’s call for secular regimes during his Arab Spring tour in September. She was obviously referring to the dangers Arab countries face in their painful transitions.

Cengiz Çandar from the Radikal daily argued that Turkey’s “zero problems with neighbors” foreign policy — designed to work only as long as the status quo is maintained — is falling apart and spoke extensively about disappointment over the direction of events in these uprisings as they become more violent.

The final day of the conference slowly drifted toward and focused on Israel, which participants accused of being the chief culprit and primary source of authoritarian tendencies in the region.

“I don’t understand why these [Arabs] who are fighting for freedom, democracy, rights for women and minorities are so obsessed with a little country like Israel,” Dror Zeevi from Israel’s Ben Gurion University asked rhetorically.

Yılmaz slammed Zeevi over the comment. “For God’s sake, everyone knows what Arabs have gone through in the region because of Israeli policies,” he said.

Participants in the Abant Platform have warned against the danger of a resurgence of old authoritarian elements in post-revolution Arab states, urging countries that have stayed relatively stable and calm to immediately enact sweeping reforms to avoid any violence and unrest.

Turkish, Arab and Western intellectuals, wrapping up the three-day annual conference, issued a final declaration on Sunday to underline challenges the Arab nations face amid political turmoil that has failed to remain peaceful and put the political future of these countries in jeopardy.

“Despite many positive developments that took place during the Arab Spring, there is still the risk of older authoritarian regimes re-emerging under different names,” the declaration, which was approved following a heated debate, said.

It added that all actors involved in the unrest have to realize that the older authoritarian regimes would try to revive themselves and urged that the major goal should be to enable the institutionalization of democracies and to strengthen civil societies to remove remnants of toppled regimes.

The declaration also urged all Middle Eastern countries to adopt a more participatory and democratic constitution based on human rights and the rule of law.

Click the links below to read commentaries from some participants of the meeting.

After one year: Quo vadis? by Gokhan Bacik

The Arab Spring and Turkey by Ergun Babahan

Neither from here nor there by Beril Dedeoglu

Discussing the Arab Spring at the Abant Platform by Ihsan Yilmaz

Yavuz Baydar An intensity of expectations and a fear of failure are now part of the peculiar process of Turkey’s transition towards democracy. It becomes rough and complicated, as days go by; it has hit serious snags. The heart of the matter is living together in peace and accord. When I watched a fresh manifestation […]