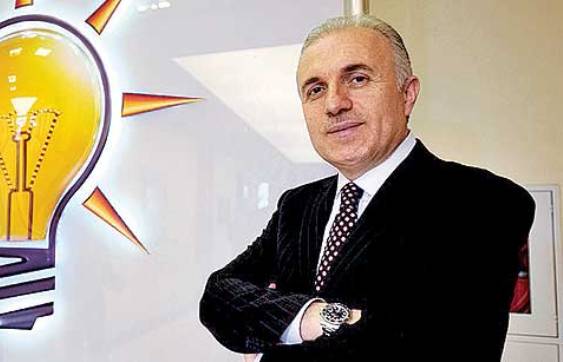 ANKARA
A number of developments ensuing from a far-reaching investigation into corruption and bribery claims that have implicated some government members evoke a “one-party state,” with the ruling Justice and Development Party (AK Party) seeing itself as superior to the state and its citizens.

Critics accuse the party’s leader and members of believing that they are the state and abusing all state powers for the benefit of the AK Party.

“Turkey is a country governed by the rule of law. Any authority or practice that was not defined by the law is considered unlawful. … If you insist [on unlawful practices], then it means that you are working to transform the country into a party state under your own leadership,”  Nationalist Movement Party (MHP) Mersin deputy Mehmet Şandır told Today’s Zaman.

With the term of one-party state rule, observers refer to a state in which power is held by the most powerful and influential political party. The AK Party, which garnered some 50 percent of the national vote in the 2011 general elections, is the most powerful party in Turkey and holds a crushing majority of seats in Parliament with some 320 deputies.

However, it is currently target of harsh criticisms due to its attempts to gain control of state institutions; remove thousands of public servants including police officers and prosecutors from their posts; appoint new figures known for their loyalty to the AK Party to replace the removed public servants; and in this way deal a huge blow to the democratic gains of the country as well as individual rights and freedoms.

According to analysts, significant achievements and reforms undertaken by the AK Party since 2002 — when it first swept into power — have made the ruling party suffer from overconfidence, which causes the party to make mistakes. A number of the party’s anti-democratic practices, which reached a peak after the Dec. 17 corruption operation, may void all the democratic achievements Turkey has gained in the past decade.

Analysts say it is not only AK Party Chairman Recep Tayyip Erdoğan, also the prime minister, who is acting like the owner of the state but also many members of the party and bureaucrats who are behaving this way.

The latest example is Afyonkarahisar Governor İrfan Balkanlıoğlu, who reportedly swore at a policeman for revoking driving license of AK Party Sındırgı Provincial Chairman Danyal Eroğlu. Media reports stated earlier this week that Eroğlu was traveling to Afyon from Ankara when traffic police stopped his vehicle and fined him due to missing documents for the vehicle. The chairman called the Afyonkarahisar governor to ask for help. The governor, on the phone, ordered one of the policemen to let Eroğlu go, but the policeman would not agree to it. Furious, the governor used profane language against the policeman, according to claims.

Şandır said the prime minister and his government have been caught red-handed in the corruption investigation and they are making speedy changes in a number of laws and regulations to save government members who have been involved in fraud and bribery. With the amended laws and regulations, according to Şandır, the AK Party is working to establish its own “state nested within the state.”

Another example of this behavior from the AK Party came from its İstanbul branch chairman, Aziz Babuşcu, who said the removal of Hizmet movement sympathizers from state institutions started long before the corruption scandal broke on Dec. 17 of last year. Babuşcu’s remarks drew condemnations, with many accusing the AK Party of removing public servants that the party dislikes from duty and filling state institutions with party supporters.

The ruling party claims the corruption investigation was orchestrated by the Hizmet movement as part of an attempt to destabilize the AK Party government. The Hizmet movement is a faith-based group inspired by the teachings of Turkish Islamic scholar Fethullah Gülen.

Furthermore, the government proposed a bill to restructure the Supreme Board of Judges and Prosecutors (HSYK), the country’s key judicial council, which is responsible for appointments, promotions and removals in the judiciary. The proposal, according to its critics, seeks to give the government a tighter grip on the judiciary. These developments later evolved into a crisis of state, with the AK Party using all means possible to prevent other branches of the state — judicial bodies and the police in particular — from functioning, so that the corruption probe would not deepen.

According to journalist Adem Yavuz Arslan, who is the Ankara bureau chief of the Bugün daily, Turkey is moving, step by step, toward becoming a one-party state, as statements by AK Party members — who drop hints that they consider themselves the owners of the state — suggest. “The ruling party, which holds a majority of seats in Parliament, has placed the judiciary and the legislature under its control,” he stated.

Arslan also noted that the AK Party has been taking steps to shelve democracy, adding that one of the most significant examples of this is plans by the party to change the structure and operation of the HSYK. “If these plans are realized [and the HSYK bill is approved in Parliament], then the entire judiciary will be placed under the supervision of [Prime Minister] Erdoğan and Turkey will … become a party state.”

A bill drafted by the AK Party to restructure the HSYK was put to a vote in Parliament, but the party recently decided to suspend the bill, seemingly due to criticisms coming from the EU. Though frozen for now, the ruling party can bring the bill back to Parliament’s agenda.

The HSYK bill has been vehemently criticized by opposition parties, who claim that the bill, which gives the executive a much tighter grip on the judiciary, would do away with judicial independence. Critics also complain that the government is moving away from a number of changes it made to the structure of the HSYK following the Sept. 12, 2010 referendum, which sought to bring the Turkish judiciary in line with EU standards. The changes were supported by the EU and the Venice Commission, the Council of Europe’s (CoE) advisory body on constitutional matters.