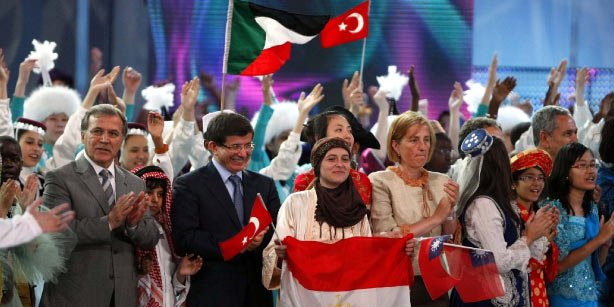 Avoiding sending a written memo, Davutoğlu sent a verbal message to diplomats serving in foreign countries via Foreign Ministry officers, saying, “It would be improper for our ambassadors to attend the Turkish Olympiads.”

“It was relayed to us that Davutoğlu doesn’t find it appropriate for us to attend the Turkish Olympiads. The message came from the ministry,” said two ambassadors, who spoke on condition of anonymity.

Foreign Ministry sources who wanted to remain anonymous did not refute the alleged order. Osman Sert, press adviser to Davutoğlu, declined to respond to Today’s Zaman’s questions asking whether the alleged order indeed came from Davutoğlu. He also did not address questions about the stance of the ministry and Davutoğlu on ambassadors attending the overseas selections phase of the Turkish Olympiads.

Orders sent to ambassadors targeting the Hizmet movement and Turkish schools allegedly affiliated with the Hizmet movement first came to public attention when Prime Minister Recep Tayyip Erdoğan called on Turkish diplomats to “tell the truth” about a corruption investigation which became public on Dec. 17 to their foreign interlocutors.

Speaking during the annual gathering of ambassadors in Ankara on Jan. 15, Prime Minister Erdoğan labeled the corruption investigation involving former government ministers as nothing but a “treacherous plot” to sabotage Turkey’s international standing.

“The process that began on Dec. 17 is a coup attempt disguised as an anti-corruption operation. It is an attempt to sabotage democracy, the nation’s will, the settlement process [of the Kurdish problem] and our foreign policy,” Erdoğan said in addressing the ambassadors. “I especially ask you to underline that this is not an anti-corruption operation but a coup attempt disguised as such,” Erdoğan stated.

Without openly naming it, Erdoğan accused the Hizmet movement led by Turkish Islamic scholar Fethullah Gülen and its “foreign collaborators” of attempting to overthrow his government through a “judicial coup” ever since the corruption investigation that shook his government became public on Dec. 17.

Ambassadors who have attended and supported the Turkish Olympiads before told Today’s Zaman they are having difficulties abiding by the extraordinary orders coming from Ankara.

The Justice and Development Party (AK Party) government’s attempts to undermine the activities of schools allegedly affiliated with the Hizmet movement has intensified in recent days. Erdoğan has reportedly been exerting great efforts for the closure of Turkish schools abroad. Sources say Davutoğlu has also joined Erdoğan in his efforts to target the Hizmet movement and Turkish schools overseas.

Okan Müderrisoğlu, a columnist with the pro-government Sabah daily, wrote on Sunday that while on his way back to Turkey from Rome last week, Davutoğlu told him if the schools had not gone beyond their educational purposes, there wouldn’t be any form of discrimination against them.

“We support anyone and any institution that plays an efficient role in promoting Turkey, contributing to Turkey’s prestige. … Some problems occurred during the opening of those schools. These problems were stated by our president [Abdullah Gül] and prime minister [Erdoğan] and they also intervened in the issue [for the opening of schools]. If they [the schools] had remained within their boundaries, there wouldn’t be any discrimination,” he reportedly said.