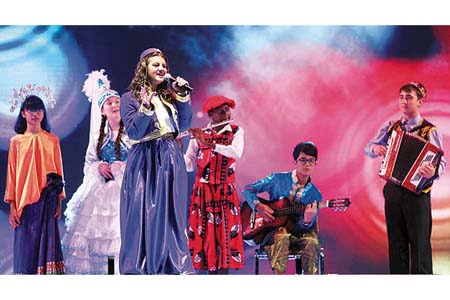 A grand inauguration ceremony was held at 19 Mayıs Stadium in Ankara on Saturday night for the 11th International Turkish Language Olympiad, a festival that celebrates the Turkish language and this year brought together 2,000 students from 140 countries around the world.

The 11th Olympiad, which is organized by the International Turkish Education Association (TÜRKÇEDER) each year as part of the International Language and Culture Festival, will be held between June 1 and 16. A total of 99 activities will be held in 55 cities across Turkey during this 16-day period. The large inauguration ceremony held to mark the start of the Olympiad in Ankara on Saturday saw the participation of several ministers and many other high-ranking government officials as well as about 20,000 spectators.

The ceremony started with a show titled “The World’s Orchestra,” in which students from around the world played various instruments, followed by solo performances. The students also performed Turkish folk dances in a show that was very well received by spectators.

Speaking during the ceremony, Deputy Prime Minister Bülent Arınç said the 2,000 students from 140 countries were embracing Turks. Expressing his gratitude to all the teachers who work in Turkish schools around the world for their efforts to give students the best education possible and for helping to organize the Olympiad, Arınç stated: “We know self-sacrificing teachers go to very remote countries, some of which they cannot even locate on a map. This is a perfect example of devotion. I want to express my compliments and my gratitude to all these teachers. We are proud of them.” Arınç also thanked and sent his good wishes to respected Turkish intellectual and scholar Fethullah Gülen, the founder of the Turkish Olympiads, at the end of his speech.

Deputy Prime Minister Ali Babacan, who is also minister for economy, also praised the teachers for their sincere efforts in teaching at Turkish schools around the world during his speech at the ceremony. “These teachers build bridges between hearts and civilizations. They work devotedly. I had the opportunity to visit Turkish schools during my overseas visits and was able to witness how the teachers appeal to both their students’ minds and hearts at the same time,” Babacan stated.

Interior Minister Muammer Güler said during his speech that the government was very pleased to host friends who speak the language of love, brotherhood and peace instead of those speaking the language of hatred and violence. Güler also thanked all those involved in organizing the Olympiad.

Another high-ranking attendee at the ceremony, Education Minister Nabi Avcı, expressed his hope for the future of the Olympiads, stating that he wants to see Turkish as a globally spoken language which is known by people all around the world.

Gökçek: A good response to those trying to create chaos in Turkey

Also speaking at the ceremony, Ankara Mayor Melih Gökçek said there are about 190 countries in the world and that Turkish is taught in Turkish schools in 140 of those countries.

“Some groups of people, in particular in İstanbul and Ankara, have been trying to make the country unstable for the past few days while the young people coming from around the world are trying to make the voice of Turkish language heard here in Ankara. The best response to those who are trying to create chaos in the country is your [spectators’] cheers and applause tonight. What happens tonight at 19 Mayıs Stadium is a good response to those who seek riots and sedition,” Gökçek said, referring to the thousands of protestors who have been engaging in demonstrations against the government to stop a construction project in Taksim’s Gezi Park for the last few days. The protests in Taksim later spread to other cities such as Ankara, İzmir and Diyarbakır.

Gökçek also thanked the teachers for their efforts and to Gülen for all his contributions to the Olympiads.