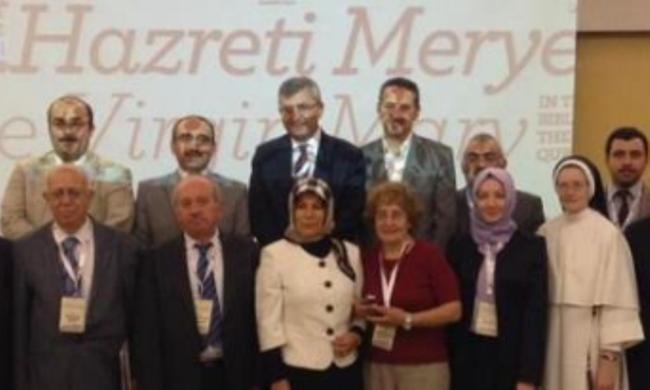 The two-day meeting was attended by a number of leading scholars and intellectuals of the field and focused on such topics as “Approaches to Mary,” “Debate on Mary,” “Mary Doctrine and its Historical Development.”

In the panel that was inaugurated by Yusuf Sağ, the Deputy Patriarch of the Turkey’s Syriac Catholic Church, Celamnur Sargut, the head of the İstanbul branch of the Cultural Association of Turkish Women (TÜRKKAD), Professor Muhit Mert, the Dean of Faculty of Theology at Fatih University, and Mustafa Yeşil, the head of the GYV, the unique position of Mary in both religions was stressed.

During the panel, six sessions were held, including “Approaches to Mary,” “Debate on Mary,” “Sufi Aspects of Mary from an Islamic Perspective,” “Mary in the Holy Scripture,” “Mary in the Qur’an,” and “Mary Doctrine and its Historical Development,” with questions and answers part that allowed in-depth examination of each topic.

Maşalyan: No woman has ever been as influential as Mary although she spoke so little

Speaking during the first session of the panel, Archbishop of Armenian Orthodox Church of Turkey, Sahak Maşalyan, explained that two women are always glorified by monotheistic religions: Eve and Mary. “Virgin Mary has always been a source of inspiration for many people. No woman has ever been as influential as Mary although she spoke so little,” he said.

Eroğlu: God refers to Jesus with the name of his mother

In the second session of the panel, Emine Eroğlu, the Editor-in-Chief of Timaş Publishing, made a presentation titled “Purified Self and Mary.” Noting that God refers to Jesus as “Jesus, the son of Mary,” Eroğlu maintained that this was a message to the male-dominated society of that time.

At the end of the panel, a three-minute video showing the life of Mary was aired, and a committee of participants started to work on the concluding statement. Chaired by Professor Ömer Faruk Harman, the Concluding Statement Committee consisted of Professor Catherine Joseph Droste, Associate Professor Mustafa Alıcı, Associate Professor İsmail Taşpınar and Kadriye Erdemli.

The concluding statement read by Professor Harman noted, “Having destroyed many exclusionary taboos of her time, Mary played an effective role in the empowerment of women.”