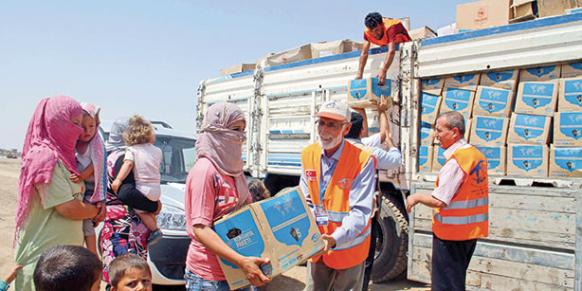 Kimse Yok Mu, one of the largest charity organizations in Turkey, has sent humanitarian assistance worth nearly TL 2 million collected by volunteers to help Turkmens and Yazidis escaping Islamic State of Iraq and the Levant (ISIL) forces in Iraq.

The assistance delivered to Turkmens and Yazidis fulfills their basic needs for approximately one week. Mainly consisting of food and some of the most urgent non-food items such as blankets, tents, soap and cooking utensils, the aid was loaded onto trucks and transferred to Iraqi Turkmen and Yazidi refugee communities.

Kimse Yok Mu Vice President Hüseyin Fazlıoğlu, who is also a coordinator of the charity organization’s domestic assistance, has said that the humanitarian aid will continue.

“Kimse Yok Mu is continuing its efforts to save those who are in need of help without regard to religion, language or race. And within this framework our humanitarian assistance for the Yazidis — escaping from the chaos in Iraq and seeking shelter in our country — is ongoing,” Fazlıoğlu said in an interview with Today’s Zaman.

According to Fazlıoğlu, the organization has prepared nearly 22 tons of food and supplies which sends to those areas where it is most needed.

Fazlıoğlu also said that they began the project of providing assistance to suffering Turkmens and Yazidis on the day chaos first erupted in the neighboring country.

The first trucks of humanitarian assistance were sent to the Erzurum branch of the Prime Ministry’s Disaster and Emergency Management Directorate (AFAD) in early July to extend assistance to Turkmen people in northern Iraq. Beyond this, two more trucks were sent across the border into Iraq to help Turkmens, Yazidis and other minorities in the Iraqi city of Dohuk. So far, the organization has sent humanitarian assistance totaling some TL 2 million to Turkmens and Yazidis in northern Iraq.

“I hope that this humanitarian assistance will double with the help of Turkish volunteers,” Fazlıoğlu said.

Echoing Fazlıoğlu, the president of Kimse Yok Mu, İsmail Cingöz, said that TL 2 million is not the end of their assistance to the people in need living in northern Iraq.

“The initial aid of TL 2 million was the decision made in the early stage of the chaos. This month we have already fulfilled our budget goal of TL 2 million. Our board is right now planning to come back to the table to evaluate the activities that have taken place so far, as well as the depth of the problem. Afterward, we will decide on whether to extend humanitarian assistance of another TL 2-3 million,” Cingöz said in an interview with Today’s Zaman.

Underlining that when providing aid, Kimse Yok Mu considers the degree of suffering and unjust treatment, rather than the ethnic and/or religious affiliations of people, Cingöz said that the legitimacy of the humanitarian assistance is also important for the organization.

“During the process of providing humanitarian assistance, we are always in correspondence with AFAD and other relevant authorities. We also contact the relevant authorities from the countries to which we are extending assistance. As a member of the UN Economic and Social Council (ECOSOC), we are also in close touch with the international community. So obtaining responses from these institutes takes up a lot of time, as a result of which, we are sometimes late delivering assistance,” Cingöz said, adding that gaining legitimacy is important in order to provide a secure corridor for the aid shipment. He emphasized that the terror organizations active in the region cause great difficulty for them and create regular delays.

Iraqi chaos did not stop humanitarian aid to Syrians

The ongoing Syrian crisis next door to Turkey, which has continued for more than three years, has left millions of refugees in neighboring countries, including Turkey.

The number of Syrians escaping their war-torn country to seek shelter in Turkey is estimated to be 1.2 million. Some sources also say that the number will reach 1.5 million by the end of the year.

Some 220,000 Syrians have already registered in 22 camps in different provinces of Turkey including Kilis, Hatay, Gaziantep, Şanlıurfa and Mardin.

“The remaining Syrian refugees are dispersed across the country and are living in terrible conditions. Young Syrians are on the streets and risk getting involved in various illegal activities. Their future is at great risk,” Cingöz said adding that the extension of humanitarian assistance is critical in this case and it will continue.

According to him, since early 2011 — the start of the Syrian crisis — Kimse Yok Mu has spent TL 67 million to help Syrians across the country, particularly those in Kilis and Hatay’s Reyhanlı and Yayladağı districts. The humanitarian assistance comprised food, clothes, caring for Syrian children, educating them and financing Syrian schools in the border cities of Turkey.