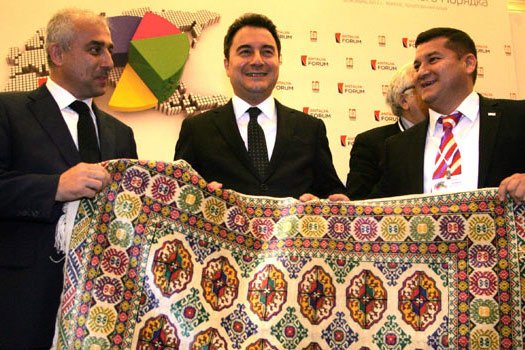 Taking a break from the heavy atmosphere of political, economic and social issues at home, senior economists and market experts from the Eurasia region arrived in the calm tourism hub of Antalya on Friday, this time to chew on scenarios mainly for a proposed overhaul of the global economic order.

The first Antalya Forum, organized by the Dialogue Eurasia Platform (DAP), opened its doors on Friday in Antalya to bring dozens of leading experts and government officials together for a brainstorming session to discuss ongoing global financial problems along with their repercussions on social life. As the main title of the panel “Rethinking the Global Economic Order” highlights, the opening session saw participants address a long-discussed issue of administrative reforms in international economic and political bodies, something that many of them called an “urgent need.”

Among the statements made in the opening session, Deputy Prime Minister Ali Babacan’s words were maybe the most striking. The minister began his words slamming European and US governments for “losing time with ineffective and short-lived measures.”

Underlining the importance of measures to maintain long-term solutions to ongoing financial troubles in developed markets, Babacan cited the lack of market confidence and political will along with protectionism among other factors that have “delayed solving the problems.” “We have long watched leaders from the US and Europe working to ease problems with a list of reforms. … Few of these measures have proved successful. The US and others no longer have the luxury of neglecting problems at home that pose a threat for world markets,” he asserted. In both developed and developing nations, the lack of sound roadmaps and clear measures for weathering the crisis will not improve the already worsening situation, he added.

Babacan finished speaking in a critical tone, calling on the United Nations, the International Monetary Fund (IMF) and the World Bank (WB) to promote a more equal representation in their administrative bodies. “Otherwise they face the threat of losing their legitimacy in the long run. … The world has changed,” he added. He declined to comment on the “gold for Iranian gas” issue.

Republican People’s Party (CHP) Deputy Chairman Faik Öztırak built on Babacan’s comments, saying that discussions for establishing a new global economic structure will be helpful in solving problems that markets have suffered during and after the 2008 global financial crisis. “It is good that this issue is being discussed more than in the past. … We need to reach a compromise to globally switch to a more human-friendly, environmentally friendly growth model,” he noted.

The Antalya Forum is the continuation of three previous annual summits organized by DAP. The previous meetings were organized under separate titles, and the platform decided to expand its scope with a Davos-like presentation this year. Some 400 participants from 21 countries, including Azerbaijan, China, Russia, the US, Japan and the UK, will present at the forum that runs through Dec. 3.

Among the keynote speakers on the panel, Boğaziçi University’s İbrahim Öztürk said the summit could attain a more global perspective with the same title — Antalya Forum — in the years to follow. “DAP is active in many Eurasian cities, and they can add value to Antalya with this summit. Whether it will be an economic or social-focus summit will be clear in the coming meetings,” he said. Babacan said he expected the forum to become a prominent venue for new ideas to address global economic problems. Öztürk offered a number of important subjects to be discussed at the meeting, including equal distribution of wealth, strengthening the economies of poor countries, measures against child labor and avoiding unfair competition to promote the free market system and switching to a global currency.