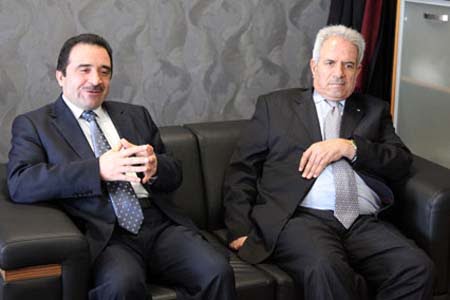 At the meeting, Ozturk briefed on aid activities in Palestine in presence of the Consul General of Palestine Adbulkerim Alkhatib as well. He revealed that they are going to launch a permanent mission to Jerusalem to perform more efficiently in the region. To contribute to the development of Palestine, in addition to emergency relief, Ozturk said, they are going to accelerate their projects in education, healthcare and humanitarian relief.

Palestinian Ambassador Maruf, thankful to Turkish people and Kimse Yok Mu for their help since 2006 said, “Kimse Yok Mu and Palestine have a long-established relation. We have been observing the foundation’s aid activities in Ramallah, Nablus, Al-Khalil and in many more. We do believe these activities will increase even more thanks to this permanent agency. Palestine needs long-term projects such as educational and healthcare aid assistance. Kimse Yok Mu will carry out projects addressing these needs. We have exchanged views on them. Palestine government will continue its support increasingly for these projects to be realized. I would like to thank you for all these.”

Following the meeting, the ambassador Maruf toured the foundation building and was informed about global activities of Kimse Yok Mu and its search and rescue unit ASYA.

Source: [in Turkish] on Haber27, April 8, 2013. English translation is retrieved from HizmetMovement.Com

Kimse Yok Mu (Is Anybody There), one of the largest charity organizations in Turkey, distributed the meat of sacrificed animals to needy families in Aceh with the participation of Korean and Malay volunteers