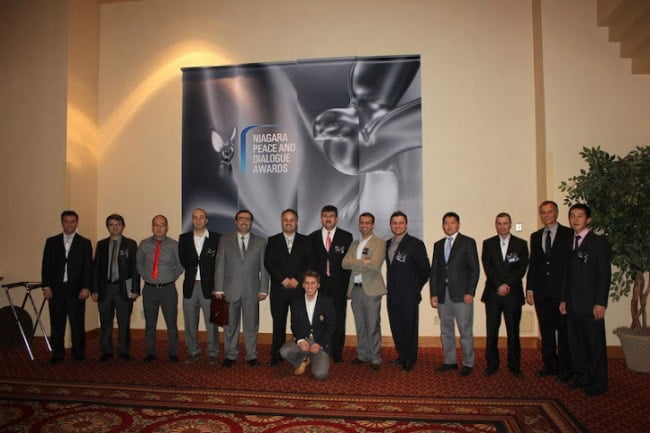 Niagara Foundation’s Nebraska chapter honored the recipients of “Niagara Foundation 2013 Peace and Dialogue Awards” at an award giving ceremony at Cornhusker Marriott Hotel, on November 15th. The ceremony was attended by over 100 guests, including the state’s high profile figures, who also had the opportunity at the event to get informed on Turkey and Anatolian people.

Allen Beerman, Executive Director at Nebraska Press Association and former Secretary of State, emceed the night. Among the distinguished guests in the ballroom were Hon. Lavon Heidemann, Lieutenant Governor of Nebraska and Greg Adams, Speaker of the Nebraska Legislature; along with numerous politicians, religious leaders and community leaders.

Having previously travelled to Turkey twice, Senator McGill recommended that everyone visit the country. “We have a lot in common with the Anatolians,” McGill noted, and reflected that she was able to learn a great deal about different cultures throughout her trip.

Musician David Marsh, able to play 14 different instruments, gave a music performance which got the thumbs up from the attendees.

Among the highlights of the night were reflections of Nebraska Journalists’ Association members on their trip to Turkey last summer.

Publisher of the Custer County Chief, Deb McCaslin, shared her –from time to time- moving reflections on the trip, which created a sentimental atmosphere in the hall. “What Anatolia is adorned with features, above all, high human values. Practically everyone can find an appeal or value that resonates with themselves,” McCaslin remarked.

The night came to a close with attendees’ posing for cameras.