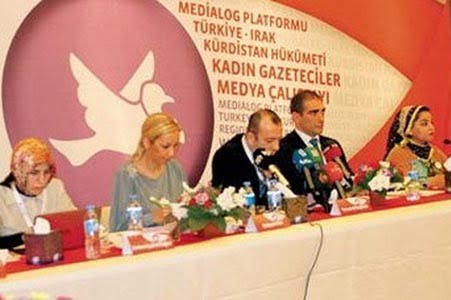 Kurdish and Turkish women met in the Iraqi town of Sulaimaniya on Sunday to discuss various issues including the role of the media in relation to women and coexistence and freedoms in the Middle East.

Fifty female journalists from Turkey and Iraqi Kurdistan joined the event, organized by the Medialog Platform of the Journalists and Writers Foundation (GYV). Turkey’s chief consul in Arbil, Mehmet Aydın Sencel, said in opening remarks that the Turkish government’s commitment to social integration with northern Iraq had been reaffirmed by Prime Minister Recep Tayyip Erdoğan many times before.

“Economic cooperation between Turkey and the government of Iraqi Kurdistan is usually widely covered by the media. There have also been many steps taken in the energy sector. But cooperation on social issues is equally as important. And we have been doing this in the Iraqi Kurdish region with our schools, hospitals and media agencies active in the area since 1994,” Sencel iterated. He said the total number of Turkish schools in northern Iraq was 12,000. “They are raising bilingual students,” he added.

Ali Baştürk, secretary general of GYV’s Medialog Platform, said there was special meaning in holding a workshop for female journalists on Mesopotamian soil. He also expressed his hope that Mesopotamia and the Middle East will become a shining star for global civilization in the future, once it regains peace and stability.

Muzaket Hussan, a professor of the Sulaimani University and 16-year media veteran, said media has an important role to play in the integration of different cultures thanks to the advances in communication technologies. Hussan said, however, that media is still being used as a propaganda tool. “In fact, the real purpose of the media is to ensure peace, but it can become a political tool if it is not used to this end and can have dangerous consequences.”

Journalist Balçiçek İlter of Turkey, who chaired a session titled “The Media Factor in Establishing Societal Peace” began her speech saying she regretted not speaking Kurdish. She asked, “How can we change the language of the media? I think the solution to this problem is to allocate more space to women in media organizations. Women should be in positions of decision-making power for a media centered on peace and the individual.” She said women were mostly associated with words such as “tenderness” and “emotional.” İlter added, “We hope that characteristics such as our practicality in solving problems are discussed more frequently.”

In a session on the language of the media and freedom, Fadime Özkan, who chaired the session, said journalists were too often politicized in Turkey, and said this made impartiality of the press impossible.