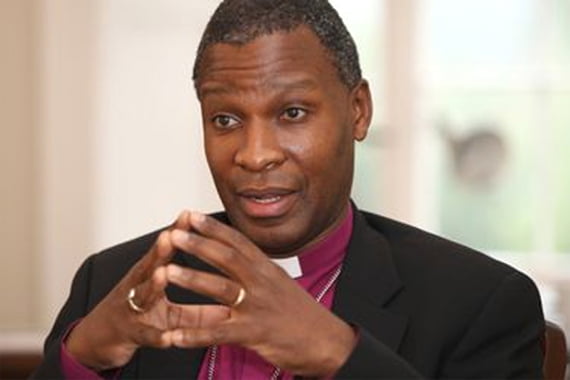 Turkey has an important message for religious fundamentalist as it is an exemplary country showing the world that people of different faiths can live with one another, Thabo Cecil Makgoba, South African Anglican archbishop of Cape Town, says.

Makgoba attended last week’s Abant Platform, which was the 29th annual seminar of the group. It was themed “Africa between Experience and Inspiration” and took place in Bolu. The platform, which was held June 28-30, also announced its partnership with the African Union this year. A total of 160 participants from both Africa and Turkey, including African Union Deputy Chairman Erastus Mwencha and Commissioner for Political Affairs Aisha Abdullahi and various African and Turkish academics, journalists and politicians, attended the seminar.

Archbishop Makgoba, who also attended the event, answered our questions for Sunday’s Zaman readers. He said he was impressed by religious tolerance in Turkey. “I think Turkey has a message for any radical religious person who believes that Christianity or Islam or Judaism is [the only truth]. Turkey has given us an example showing that we can all coexist because we all worship God.” He said Turkey shows that “we can respect each other. I think [Turkey has] an answer to the people in the holy basin that is Israel and Palestine. [Turkey has] an answer to most parts of North Africa where there is still conflict between Islam and Christianity and [Turkey has] a message to those [areas] in Croatia where people are saying they cannot [tolerate] the call to prayer.” He said he has found the degree of religious tolerance in Turkey to be “amazing.”

The archbishop said the Abant Platform meeting has helped him see that negative experiences have to be dealt with, not escaped from. He also suggested that individuals committed to inter-faith dialogue from Turkey and Africa should build schools, medical clinics and other facilities in an inter-religious context. “We should probably get imams from Turkey to go and meet with the bishops and priests in South Africa to say we all belong together.”

Makgoba also spoke about the key issues in Africa, one of which is education. He said education is the most important investment a country can make but added that it is an investment for the long haul. “Maybe we could encourage Turkish businesspeople and South African businesspeople to also see this as an investment and invest in education, even if they are not the ones who implement education [policies].”

The archbishop also spoke about South Africa’s anti-apartheid struggle and the role of religion and faith in it. “Many people in South Africa believe in a goal. Even those that do not believe in a god have some sort of spirituality that [guides them].” He said faith-based organizations should come in and help people to see the crucial values human beings should build. “We live in a modern world where the majority has a faith, and we need to take that into consideration and as we did in the apartheid years, call people of all faiths to [work for a common goal], say, ‘Let’s declare war on poverty’ for example, or ‘Let’s declare war on illiteracy’ and ‘Let’s work together across all faiths.’ This project then will work if you take faith seriously.”

Sharing his impressions of the Abant Platform and its organizer the Journalists and Writers Foundation (GYV), the archbishop said: “I am very impressed and very jealous. We have SANEF [South African National Editors Forum] at home, but SANEF only brings editors together although it is my wish that what the Journalists and Writers Foundation is doing here could be shared with our journalists and writers back home.” He added: “I think they need to be congratulated. I met the president a short while before his presentation, and we were talking with him and he has inspired me because he says this is one of the things that His Excellency Fethullah Gülen has started.”

Makgoba is currently the South African Anglican archbishop of Cape Town. He is a graduate of Orlando High, Soweto, and had a B.S. from Wits University before attending St. Paul’s College in Grahamstown to study for the Anglican ministry. Archbishop Makgoba has a master’s degree in education psychology from Wits. He was appointed bishop of Queenstown (Suffragan Bishop of Grahamstown) in 2002 and became bishop of Grahamstown in 2004. He became archdeacon of Sophiatown in 1999. He became archbishop of Cape Town in 2007, the youngest person ever to be elected to this position.

ABDULLAH BOZKURT Turkish volunteers also established what many here say is a very accomplished school in the capital, nurturing and educating future generations of Sudanese who will be keen to maintain friendly ties between the two nations. I was not planning to end up in Darfur last week when I booked the flight to Ankara […]

Fr. Leo D. Lefebure*  03 July 2012, Tuesday The members of Hizmet have been unfailingly gracious and cordial, respectful of Christianity and mindful of the many values shared by Muslims and Christians.  Their concern to build constructive relationships and to collaborate in building interreligious understanding is inspiring. Since the 1990s, I have been involved in […]