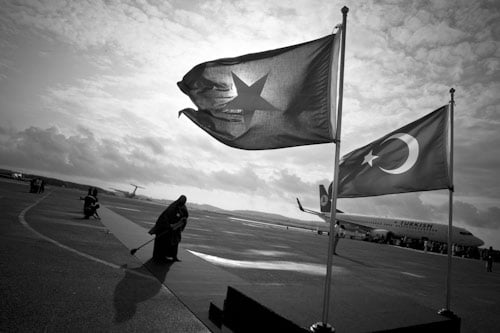 …In recent years, plenty of madrasas have already been established in Somalia by foreign powers, especially Gulf states. Even the most devastated areas have access to some form of religious education. But that just makes Turkey’s efforts to spread its form of moderate Islam an even more important strategic move, according to Mehmet Arda, professor of international relations at Istanbul’s Galatasaray University.

While Turkey might still be involved in Somalia if it were not an Islamic country, Arda believes some civil society groups might not be as engaged. “It’s normal for religious people to want other people to be religious in the same way. They just want people to be good Muslims, as they are.” The uptick in Turkish-African trade in recent years attests to the value of shoring up diplomatic or economic relationships with religious and cultural outreach—an object lesson with wide applications. But Turkey also has an advantage in this regard. Many Turkish groups active in Africa are affiliated with the Gülen network. This worldwide movement is inspired by the moderate Islamic teachings of Turkish [islamic scholar] Fethullah Gülen, whose writings read like a virtuous power doctrine of their own, emphasizing altruism, tolerance, and education….Originally charged with trying to undermine the secularity of the Turkish state, Gülen has been acquitted but remains in Pennsylvania.

Lacking any formal structure or membership, the exact size of the Gülen movement is difficult to appraise, but it is believed to have more than 10 million followers in Turkey alone. Gülen is linked to more than 1,000 schools around the world as well as Turkey’s ruling Justice and Development Party (AKP), Turkish media, think tanks, and universities.

Starting in the late 1990s, schools operated by adherents of Gülen’s teachings began to spring up across sub-Saharan Africa. For the Gülen movement, the region has been a “priority area” for the past decade, according to Gareth Jenkins, a Turkey analyst and senior fellow at the Central Asia-Caucasus Institute’s Silk Road Studies program.

In many cases, Gülen-inspired schools were the first institutions to “break the ground” by establishing a Turkish presence in African nations, says Arda. Now the number of Gülen-affiliated Turks in Somalia is growing rapidly. But their focus is not on missionary work. Rather, the presence of Gülen-oriented schools across the continent has eased the entry of Gülen-affiliated Turkish businessmen and development workers, especially in parts of Africa where other countries fear to tread. The Turkish Confederation of Businessmen and Industrialists and the Turkish International Cooperation and Development Agency are two institutions whose members are likely to “have an affinity with the Gülen movement,” says Arda—though, he stresses, ties are often informal.

Gülen affiliates, says Jenkins, have been the driving force behind many of the new relationships between Turkey and sub-Saharan African nations over the past two years. Since its founding, the Turkish Republic “hasn’t really had any diplomatic or political relations with black Africa besides these,” he says. By connecting Turkish businessmen, aid workers, and developers with their like-minded countrymen across the continent, the Gülen network is facilitating the spread and scope of Turkey’s virtuous reputation.

“Our schools are a bridge between countries—bridges of education, bridges of culture, bridges of economy,” says Çelik, who worked in Gülen-inspired schools in Uzbekistan, Kyrgyzstan, and Afghanistan before coming to Somalia in 2011. There’s nothing inherently sinister about the Gülen network’s operations in sub-Saharan Africa, according to Arda. It is simply the Turkish way of breaking ground in a region where they don’t have the longstanding presence and automatic influence of bigger, wealthier countries….

* Julia Harte is a writer based in Istanbul.