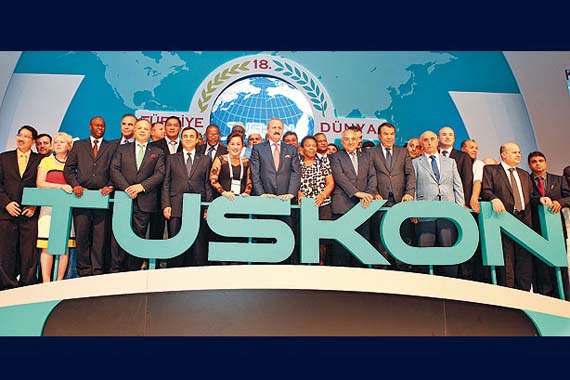 Economy Minister Zafer Çağlayan said Tuesday that the Turkish Confederation of Businessmen and Industrialists’ (TUSKON) Turkey-World Trade Bridge summit, which opened its doors to visitors from around the world on Wednesday, is on its way to becoming a global brand as it gets better every year.

Çağlayan said the event has been attracting larger crowds business people each year, adding it will soon be a world brand patented in Turkey.

“We expect around 1,300 people from 135 countries to make an estimated 20,000 business-to-business [transactions]. The two-day event has a new characteristic. On Friday, some 1,478 foreign attendees will go to 44 different [Anatolian] cities and meet with counterparts there. This event is one of a kind,” Çağlayan said at a Wednesday press conference at TUKSON’s opening ceremonies in İstanbul.

The foreign participants will explore investment and partnership opportunities at the event, which international businesspeople from the construction and furniture sectors as well as related businesses will attend. The TUSKON summit is sponsored by the Turkish Ministry of Economy and the Turkish Exporters Assembly (TİM).

The Turkish economy minster also announced that seven countries are participating in the conference for the first time: Cape Verde, the Seychelles, Guinea-Bissau, Botswana and Djibouti from Africa, along with Venezuela and Panama from the Americas. He went on to underline the importance of the Latin American countries’ presence at the event.

Çağlayan said Turkey will not be discouraged by troubled economies in the EU and will continue to expand businesses in all corners of the globe.

Foreign TUSKON attendees looking to make connections in a wider range of global markets say ongoing protests in Turkey did not factor into their decision to attend the summit.

Despite widespread unrest in Turkey over the proposed redevelopment of an İstanbul park, the TUSKON is confirmation that many foreign businesspeople aren’t afraid of a few protests.

Carlos Soler, a Paraguayan lawmaker who attended the summit as part of a delegation including 16 companies, told Today’s Zaman that he had only fleeting worries about security in Turkey. “What we were told is just the opposite of what we have seen in Turkey since we arrived here [on Tuesday]. They told us to stay away from specific places such as Taksim Square, but there was not security problem as far as we have observed. We have not even thought about cancelling our trip to Turkey due to demonstrations.”

Libyan parliamentarian Abdalla Ali Jouah, who is here form business relationships for reconstruction efforts in his home country, said his delegation saw no point in cancelling their trip.

“Television stations and newspapers are always exaggerating small events and making people worry. It is normal for democratic countries to have such protests,” Jouah said told Today’s Zaman.

When asked about what kind of business opportunities Libyans were looking for, Jouah said the most important thing is to support reconstruction projects. The North African country is trying to rebuild its ruined infrastructure after a bloody civil war toppled longtime dictator Muammar Gaddafi.

“We are asking for the support of Turkish businessmen [at this event] in rebuilding Libya as we have years of friendship with the country,” said Jouah, adding that his aim is to win back foreign investors who left the country after security deteriorated in 2011.

Libyan businessman Nagib El-Sabahi said that his delegation chose Turkey because there are no visa requirements between the two nations. “TUSKON is working as a bridge between Turkey and the world that provides meeting opportunities with foreign investors besides Turkish businesspeople,” Sabahi said.

Anwar Abda Kaid el Hadha, a Yemeni businessman in the construction industry, told Today’s Zaman that Yemeni businesspeople found out about TUSKON through Turkish schools in their country. He said that TUSKON has become a bridge for Yemeni businessmen who want to know about Turkey and do business there.

“TUSKON has done a lot for business life in Yemen. We used to hear about the successes of Turkish tradesmen who have being making business connections around the world. Yet we were not able to get into contact with them, and TUSKON helped us do that,” el Hadha said.

The Turkey-World Trade Bridge summit ends on Thursday. The previous 17 summits saw more than 27,000 foreign and 40,000 Turkish businesspeople participate and created trade worth an estimated $26 billion.