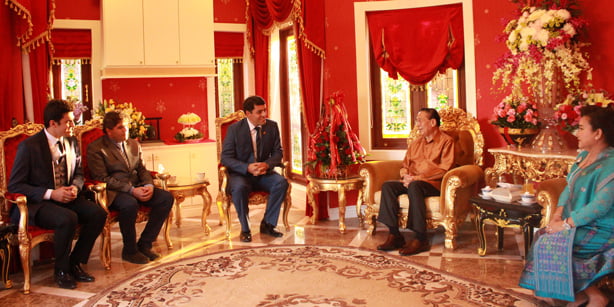 Choummaly Sayasone, president of Laos, has hosted officials from a Turkish school in the country at the presidential palace. (Photo: Cihan)

Sayasone, together with his wife Keosaychay, hosted Yılmaz Arı, the president of the Eastern Star Bilingual School, which was established in 2006, and other senior officials of the school.

Stating that his grandchild graduated from the Turkish school last year, Sayasone added that he was pleased with the education provided at the school. He added that the school makes a great contribution to their society.

Underlining that the Turkish school is a “beautiful gift” for them, the president said he would like other Turkish entrepreneurs to make investments in many other sectors in Laos.

Arı gave Sayasone and his wife a painting of themselves as a gift.

While attending a culture festival held by the Eastern Star Bilingual School last week, Vice Minister of Education Lytou Bouapao also emphasized the high quality of education at the school. Bouapao thanked the school’s officials and teachers, adding that his child is also being educated there.

The Eastern Star Bilingual School was twice awarded the state medal of honor due to its success in the educational field.